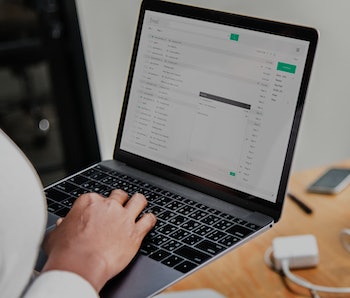 There’s no shortage of terrible teenage inventions: Promposals, the condom-snorting challenge, and ear-vaping come to mind. But the most catastrophic idea ever brought fourth by a precocious young mind has got to be email.

We’re sure the young inventor V.A. Shiva Ayyadurai — who began [building the first code](](http://techland.time.com/2011/11/15/the-man-who-invented-email/) of what became email in at the tender of age of 14 — meant well with his idea for a “High Reliability, Network-Wide, Electronic Mail System.” But new research from the Michigan State University, one of the first to measure the effects of “email distractions” on managers, leadership, and productivity, is pretty damning.

We should probably all just go back to using snail mail and rotary phones now while we still have the chance.

Why Email Is So Counterproductive

That assessment may seem harsh, but the extent of email’s drain on our time and resources is actually pretty alarming. According to the new paper, published in the Journal of Applied Psychology, we spend almost eight hours a week simply recovering from email distractions. That’s almost a full work day each week spent re-focusing on whatever you were trying to do before you just had to answer Gmail’s Siren Song.

“Email is useful but it can become disruptive and even damaging if used excessively or inappropriately,” said Russell Johnson, a professor of management at Michigan State and the paper’s lead author in a statement.

The biggest problem that email presents? It has the potential to distract us from more important things, particularly for managers. When your boss spends too much time on email, the types of tasks they’re more likely to neglect are things called leader behaviors, which, frankly, sound kind of important.

“[Leader] behaviors relate to motivating and inspiring subordinates, talking optimistically about the future or explaining why work tasks are important,” Johnson explained. “When managers reduce their leader behavior and structure behaviors, it has been shown that employees’ task performance, work satisfaction, organizational commitment, intrinsic motivation and engagement all decrease, and employees’ stress and negative emotions increase.”

In other words, managers who spend too much time on email don’t spend enough time guiding their employees, which drives down the quality of work on pretty much every imaginable variable, from how much they get done to how happy they were. As it turns out, we need those motivational pep talks a lot more than we think!

Fortunately, there is a pretty simple fix here, which is to check your email on a schedule. There’s important stuff in that inbox we can’t exactly ignore, but by checking our email on a schedule, we can mitigate those eight or so hours a week we spend switching back and forth between the two without letting important work or reminders fall through the cracks.

More like this
Mind and Body
8.15.2022 12:30 PM
Neuroscientists finally figured out why thinking can be so exhausting
By Elana Spivack
Innovation
8.15.2022 1:33 AM
47 popular home upgrades people are making that are under $35 on Amazon
By Christina X. Wood
Innovation
8.5.2022 11:00 AM
Alexa could diagnose Alzheimer’s and other brain conditions — should it?
By Joanna Thompson
Related Tags
Share: