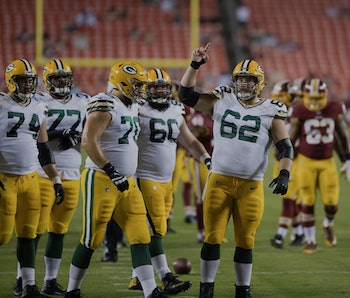 The Green Bay Packers head to Chicago to play the Chicago Bears in this divisional matchup featured as the opening Sunday Night Football game on NBC. Chicago recently acquired linebacker Khalil Mack to their defense, but the Bears are merely hoping that his presence can help slow down Aaron Rodgers and Green Bay’s offense.

To predict the result of this Week 1 match-up, Unanimous A.I. used what’s known as swarm intelligence to forecast the week’s slate. About 50 NFL worked together as a hive mind to make picks. As you can see in the animation below, each participant controlled a little golden magnet and used it to drag the puck toward the answer they thought was the most likely outcome. As the users saw the puck move toward a particular outcome, it triggers a psychological response. They readjust their decision-making, building toward a consensus.

The swarm has high confidence — it’s 84 percent sure — that the Packers will win this game, but it won’t be easy because this is a very important game for both teams.

Want to join the hive mind that picks NFL matches every week? Sign up to participate in future predictions