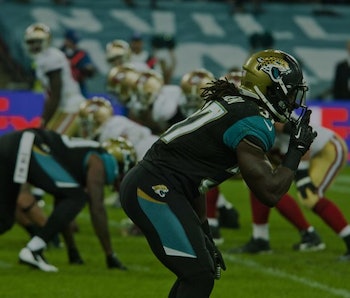 The Jacksonville Jaguars have one of the elite defenses in the league, and will depend on their dominant secondary to withstand a potent Giants offense that features wideout Odell Beckham Jr. when they travel to MetLife stadium to play the New York Giants on Sunday.

To predict the result of this Week 1 match-up, Unanimous A.I. used what’s known as swarm intelligence to forecast the week’s slate. About 50 NFL worked together as a hive mind to make picks. As you can see in the animation below, each participant controlled a little golden magnet and used it to drag the puck toward the answer they thought was the most likely outcome. As the users see the puck move toward a particular outcome, it triggers a psychological response. They readjust their decision-making, building toward a consensus.

The outcome of this game isn’t one-sided, and a swarm of 33 NFL experts predicts that Jacksonville will win, but it isn’t confident about it. This game will be one to watch closely on Sunday.

The Giants host the Jaguars in a 1 p.m. kickoff on Sunday, September 9.

Want to join the hive mind that picks NFL matches every week? Sign up to participate in future predictions

More like this
Innovation
21 hours ago
A sports physicist reveals the hidden science behind this year’s World Cup soccer ball
By The Conversation and John Eric Goff
Innovation
November 30, 2022
Farts say more about your health than you think — now, scientists are listening
By Max G. Levy
Innovation
November 24, 2022
Human-free farms could solve a major food problem
By Molly Glick
Related Tags
Share: