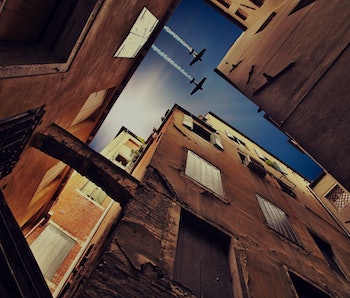 Residents of Queens, New York live in the shadow of LaGuardia Airport, one of the busiest in America. The incessant noise of traveling planes has become a fact of life, but recent shifts in flight paths has made the din even worse for some people. It’s become so bad that, as a new study reveals, the noise is leading to pronounced health effects for the people living beneath those highways in the sky.

Lead researcher Zafar Zafari, Ph.D., of the University of Maryland School of Pharmacy and a team from Columbia University’s Mailman School of Public Health had noticed a change in the way flights from Queens’ LaGuardia airport left the runway and saw a chance to investigate its health effects. The new study, published in The International Journal of Environmental Research and Public Health, describe the results of their investigation, showing the effect that new flight pathways are having on levels of anxiety and cardiovascular disease in people who are directly exposed to the noise.

It was the change in flight patterns that made the study possible. Historically, flights leaving LaGuardia flew directly over Arthur Ashe Stadium in Flushing, Queens, where the US Open is held every August. But because the noise was deafening for both players and spectators, flight planners created a new route, called the “TNNIS Climb,” which redirected planes from their paths over the stadium toward residential neighborhoods. In 2012, LaGuardia Airport transitioned TNNIS into year-round use in an attempt to cut delay times and reduce costs. As the study shows, costs weren’t reduced — in fact, they were augmented. Zafari tells Inverse that his team’s models showed that transitioning to the year-round use of TNNIS had far more health costs than economic benefits.

“They only showed the benefits at JFK, and we captured that in our model,” he says. “But on the other side, you lose a lot of health because of the year-round use of TNNIS.”

“You know, a fact of living in Kew Gardens is that you’re going to hear airplane noise,” M.K. Moore, a resident of Kew Gardens and president of the environmental group Friends of Forest Park, tells Inverse. “Perhaps the flights are more frequent, but I understand the decision because at the Open, everyone is outdoors. So the noise is very loud to them.” What Zafari and his team wanted to quantify was the degree to which the noise was purely an aesthetic concern, and how much it was a physiological one.

So, his team constructed a statistical model based on publicly available reports from LaGuardia, flight tracking information, and established literature that links aircraft noise with anxiety and heart disease. “There’s a study that shows being exposed to aircraft noise for above 60 is associated with a hazard risk of 1.14. In other words, a 14 percent higher risk of cardiovascular disease development,” he says.

Real-time data on the noise caused by air traffic allowed the team to zero in on two areas of Queens: community board districts 7 and 11, where the noise had become constant and deafening since 2012. Zafari’s team determined that between 31,329 and 83,807 people are exposed to dangerous levels of noise in Queens each day, exposing them to an increased risk of anxiety and heart risk. They also found that, after the airport adopted TNNIS full time, those people were exposed to about 10 decibels more noise than before. Those extra ten decibels are equivalent to one less additional “quality adjusted life year,” or QALY — a public health metric used to determine whether an intervention actually has an impact on a person’s daily life.

“The removal of TNNIS would give you one additional QALY,” Zafari says. “That means that for an average person, not being exposed to the noise of TNNIS, if you follow that person over a lifetime, would be almost a year of full health.”

Moore, whose neighborhood is on the border of district 7, can still hear the airplane noise in his neighborhood, which, at the time of writing, is around 53 decibels. In several areas of Queens, it is closer to 70 decibels. For his model, Zafari only counted neighborhoods exposed to 60 decibels of noise — a conservative measure, higher than the European threshold of 55 for cardiovascular risk.

For his part, Moore doesn’t worry too much about the effects of airplane noise — although Kew Gardens doesn’t have to deal with as much noise as it’s other places. Neighboring communities have gone back and forth between residents and LaGuardia about the TNNIS route, but residents seem willing to work it out. It’s the route that’s the enemy, not the airport itself.

“The thing about Kew Gardens is that we’re an airport community,” Moore says. “We are full of airport employees, pilots, flight crew, I have several living in my building. They contribute to our community.”

According to the new paper, however, the TNNIS route might not even be good for the community. When Zafari ran the simulation, roughly 25 percent of scenarios resulted in neutral health effects and cost-saving benefits for the airports. The rest of the scenarios, he found, extracted a cost that he believes isn’t worth the risk.

He eventually hopes to revise the model to include other potential effects of noise on Queens residents, for instance, the effect it might have on sleep or performance in school. But even he admits that those parameters are hard to capture in a simulation. While Zafari continues to tweak his calculations, he should hope the people of Queens are as resilient as Moore, who says that he doesn’t mind the noise too much.

More like this
Science
8.3.2022 3:44 PM
Ground-breaking technology restores dead organs back to a life-like state
By Miriam Fauzia
Mind and Body
22 hours ago
One type of walking reliably boosts fitness more than any other
By Lindsay Bottoms and The Conversation
Mind and Body
8.7.2022 7:00 PM
Repairing America’s underground infrastructure reveals an unsettled scientific debate
By Robin Lloyd and Undark
Related Tags
Share: