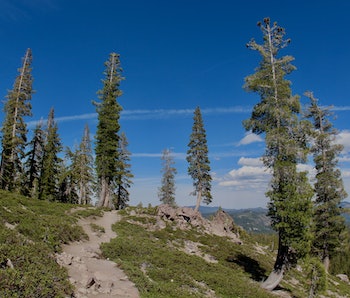 To actually achieve the goals set by the Paris climate agreement, we are going to have start producing negative carbon emissions. And, while this seems obvious, a new study suggests that growing forests would help, like, a lot, more than policy makers had previously considered.

Of the 116 possible paths considered by the Intergovernmental Panel on Climate Change (IPCC) toward getting the percentage of atmospheric carbon down to somewhere between 430 and 480 parts per million, 101 involve some form of negative emissions technology, meaning some form of carbon capture and storage. After the Paris Climate Summit, one technology that started garnering a lot of interest was “bioenergy plus carbon capture and storage,” or BECCS.

BEECS basically involves growing a lot of plant matter — fast-growing trees, like poplars; tall switchgrass native to the American prairies; and/or the parts of agriculture vegetation that we don’t eat — and burning it for fuel in a way that the carbon given off is safely stored somewhere, typically underground.

“BECCS is appealing because of the dual benefits,” Anna Harper, a research fellow in climate and vegetation science at the University of Exeter, tells Inverse. “It delivers energy — reducing the need for fossil fuels — and it removes CO2 from the atmosphere.”

It’s an enticingly simple solution, but Harper also says that the devil’s in the details and there are lots of ways the method has thus far come up short.

“For this reason it was included in scenarios for studying climate change, and I think that pre-dated any big interest from policy makers,” she says. “But our study shows that any policies involving BECCS need to carefully consider the land cover change involved, or else they could add more CO2 into the atmosphere than they take out.”

To get down to a maximum temperature increase of between 2 and 1.5 degrees Celsius — as the IPCC and the Paris agreement hope for — Harper and her team found that BECCS would have to be much more selectively applied than previously thought. In many instances, preventing deforestation, encouraging reforestation, and proactively pursuing afforestation (growing a forest where there had not been one before) all would yield better carbon mitigation results than BECCs.

Harper and her group used two sophisticated computer models simulating the behavior of vegetation and soil, running them with land-use strategies that had been previously considered by the IPCC and others for stabalizing the climate. One was IMAGE an Integrated Model to Assess the Global Environment, which simulates the environmental consequences of human activities worldwide. Another was the Joint UK Land Environment Simulator, or JULES, a land surface-use modeling software for carbon mitigation. Both are freely available for anyone’s own non-commercial use — say if you would like to play a very realistic version of the PC game Civilization focused on salvaging the ones we already have.

Their results, published Tuesday in the journal Nature Communications, suggest that BECCS could actually lead to a net increase in greenhouse gases in the atmosphere, if they’re used too much, or in the wrong regions.

“The most important forests to preserve from this perspective are in northern high latitudes (the ‘boreal’ forests in eastern Canada and western Russia),” according to Harper, “Land that has already been degraded or deforested is often a better option for growing bioenergy crops for BECCS (again, only taking into consideration the carbon that can be stored).”

Harper also says that she and the rest of the Exeter group found the starkest contrast when modelling scenarios wherein forests where harvested in the future to make way for a BECCS site, versus a scenario where the forests remained. “The bottom line,” she says, “is that it’s better to maintain our present-day forests.”

This is not an entire knock on the concept of BECCS however, as her coauthor Tom Powell, an ecologist and geographer at Exeter, noted in a prepared statement. “In some places BECCS will be effective, but we’ve found that in many places protecting or regenerating forests is much more sensible.”

There are some other, potentially dire, fine details too.

As the MIT Technology Review noted back in 2016, some BECCS, like Archer Daniels Midland’s biofuel project in Decatur, Illinois., have experienced mixed results. (Their plan involves using the trapped carbon dioxide to help liberate more fossil fuels from the bottom of the ocean for consumption, an end-goal that, some environmentalists would say, defeats the point.) Others, like the White Rose Carbon Capture Project, have simply had difficulty staying afloat financially.

Forestation too could prove to be insufficient or counterproductive in certain contexts — particularly as climate change wreaks havoc on ecosystems.

As Richard Houghton, a senior scientist with the Woods Hole Research Center, put it to ThinkProgress,“The carbon in a forest is more vulnerable than carbon underground.”

“There is a danger in fixing all our problems by adding more forests, because if you take that approach but climate goes on changing and it keeps getting warmer, then all you’ve done is fill the world up with fuel, either through disease, insects, or fire and drought.”

More like this
Innovation
7.30.2022 11:00 AM
Congo peat swamps are under threat — with catastrophic environmental consequences
By Bart Crezee, Simon Lewis and The Conversation
Innovation
7.30.2022 10:00 AM
Railways around the world are literally melting — here’s why they can’t take the heat
By Kangkang Tang and The Conversation
Science
8.10.2022 3:27 PM
Climate change may push North America’s forests to a “tipping point”
By Tara Yarlagadda
Related Tags
Share: