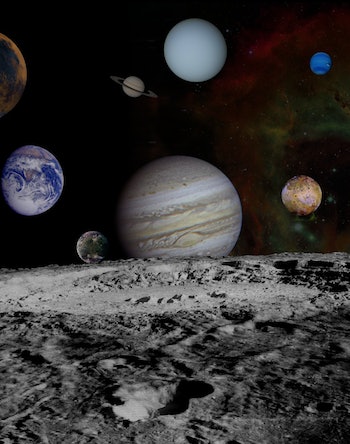 It took a year to map their orbits, but a dozen new and lost moons have been discovered in transit over Jupiter, including remnants of ancient moons destroyed by oncoming orbital traffic. Jupiter’s moon count has stood at 69 since July 2017, but as a team from the Carnegie Institution for Science reveal Tuesday, the number is actually much larger (but no longer quite as nice).

The announcement brings the total count of Jupiter’s moons up to 79. Some of the moons are completely new discoveries; the others had been assumed to exist but had orbits that turned out to be different and were hard to re-observe or relocate.

Most moons typically orbit in the same direction as their planet’s rotation, or prograde, but nine of the newly discovered moons are actually traveling in the opposite direction of that spin — in retrograde. This strange family of moons is so far out from Jupiter itself that it takes about two years for them to get around the planet, Scott S. Sheppard, Ph.D. of the Carnegie Institution for Science tells Inverse in Tuesday’s episode of I Need My Space.

Within this swarm of retrograde moons, Sheppard and his team discovered a very tiny new moon — less than a kilometer in diameter — chaotically traveling against the tide in a prograde orbit.

“It’s actually going head-on into these retrograde objects,” Sheppard says. “It would be like driving down a highway going the wrong way.”

Sheppard and his team have named the tiny daredevil moon Valetudo, after the Roman god Jupiter’s great-granddaughter. The naming convention is that all of Jupiter’s moons have to be named after appropriate characters from Greek or Roman mythology.

“The best planet to name moons after,” Sheppard says, “is Uranus, because it’s the only one that doesn’t deal with Greek and Roman mythology. You could name them after Shakespeare characters.”

The last of the two new moons orbit in prograde and are much closer to Jupiter, taking a little less than a year to complete their journey. Given their similar angles with respect to Jupiter and their similar orbital distances, these moons might be parts of a larger moon that had been broken apart by asteroids and other objects that had been pulled into the planet’s orbit, says Sheppard.

He has a similar theory about Valetudo — that it’s a last remnant of a prograde moon that collided with outside objects, helping to bring them into Jupiter’s orbit.

“There probably was a big prograde moon out there that head-on collided with one of these retrograde objects at some point, broke apart the retrograde object, and the two groups probably ground each other down,” according to Sheppard. “That’s why we see these big groups today.”

Obviously, the main thing people want to talk about is that Jupiter no longer has 69 moons, a major blow to bored middle schoolers and adults who like to use the Borat voice. While it is true that Urban Dictionary reassuringly lists the new Jovian moon count, 79, as another numerical double entendre (surprise), Sheppard says that nobody should get too comfortable with this latest tally.

“Well, it probably won’t stay at 79 for very long,” he says. “We actually found, on some of the best nights we had, we could image objects even deeper — things that are right on the edge of our noise.”

Listen to our full conversation with Scott S. Sheppard in episode 16 of I Need My Space, “We Stumbled On Jupiter’s 12 New Moons” available on Apple Podcasts.