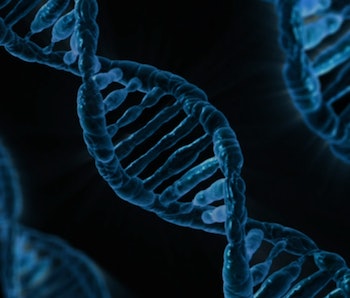 Since the beginning of life on this planet, four letters have governed all of the biological processes of every organism that has ever lived and died: A, C, T, and G. These are the four nucleotide base pairs that help compose DNA and dictate what an organism looks like, how it behaves, and what its ecological role is in nature. (There’s also U in place of T in RNA, for all the genetic completists out there.)

But the times, they are a changin’. The rise in synthetic biology means no longer being confined to just four letters to make DNA. After decades of work, Steven Benner, an organic chemist at the Foundation for Applied Molecular Evolution in Florida, has finally expanded the code with new letter orders to basically improve it. And the result is two new, artificially-made nucleotides: P and Z.

In two recently published papers, Benner and his colleagues show how P and Z can fit into the DNA’s helical structure and help maintain the natural shape of genetic material. Even better, DNA with P and Z behave and — most importantly — evolve just like normal DNA. Benner’s work on P and Z is outlined in bigger detail in Quanta Magazine.

There’s a practical issue for why expanding the genetic alphabet from four to six letters is helpful. DNA helps encode amino acids, which can be strung together in millions of ways to make proteins that help to build us as we are and move our biological processes forward. But the current four-letter alphabet only encodes 20 amino acids. A six-letter alphabet, however, could encode 216 different amino acids and be used for exponentially more different protein structures.

There are a ton of ways scientists could use this new six-alphabet “FrankenDNA” in genetic and medical pursuits. Bennett’s second paper outlines how our DNA sequences with P and Z can selectively bind to tumor cells. This observation could help in identifying where cancerous tissue may be located in the body. The ability to synthesize newer kinds of proteins could also prove very helpful in solving many kinds of research questions about biology, and provide some fascinating insight into evolutionary processes.

The biggest drawback, however, is that more nucleotide letters creates bigger chances for errors to occur in DNA. Having just four different nucleotides limits the kind of mutations that could occur and greatly reduces the chances that a very severe or lethal mutation will form. Even just two more additional types of nucleotides could prove disastrous in terms of DNA repair and mutation control.

Regardless, this will certainly not be the last time we can expect to see new nucleotides make their way into DNA. Synthetic biology is only just starting to get off the ground.