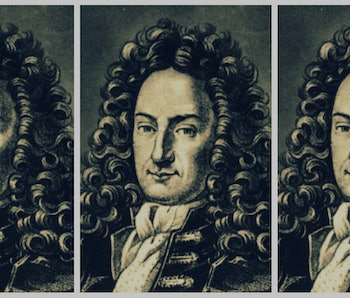 “The present is big with the future,” Gottfried Wilhelm Leibniz once said, and he would know. The 17th-century philosopher and mathematician developed the binary number system that is still being used today. Many of his most celebrated quotes look towards the future and oftentimes depict what is possible with advanced computing.

On Sunday, Leibniz’s 372nd birthday was honored with a Google Doodle. Not only was Leibniz a philosopher exploring both faith and rationalism, but he was an inventor who developed several prototypes of mechanical calculators. However, it was his invention of the modern binary number system in 1689 that would become the foundation of the modern computer.

He may not have discussed computers by name in the 17th century, but his ideas for the tools that would advance scientific knowledge are prescient, especially when remembering it was his binary system that would later solve the very challenges he’d lament.

1. Leibniz Envisioned the Possibilities of Automation

“It is unworthy of excellent men to lose hours like slaves in the labor of calculation which could safely be relegated to anyone else if machines were used.”

Throughout his career, Leibniz invented several types of hand-cranked and mechanical calculators, and sought to add automated multiplication and division to Blaise Pascal’s calculator. Leibniz saw the necessity of automated calculation as a way to streamline scientific processes and alleviate scientists from some of the more tedious aspects of computing so that they may focus on bigger-picture innovation.

2. He Drew Inspiration From the Human Brain

“If we were magically shrunk and put into someone’s brain while she was thinking, we would see all the pumps, pistons, gears and levers working away and we would be able to describe the workings completely, in mechanical terms, thereby completely describing the thought processes of the brain. But that description would not contain any mention of thought! It would contain nothing but descriptions of pumps, pistons, levers!”

Although it is Leibniz’s work with binary code that would lead to modern computing, today’s innovators are looking beyond zeros and ones and towards human brains as an approach to building future computers. Leibniz wouldn’t have been against the idea, as his writing frequently discussed the mechanics of a human brain and the way scientists perceive its processes.

“I am convinced that the unwritten knowledge scattered among men of different callings surpasses in quantity and in importance anything we find in books, and that the greater part of our wealth has yet to be recorded.”

In an essay on the method of certainty and the art of inventing, Leibniz discussed the breadth of knowledge that had yet to be recorded and the ways in which these thoughts could be captured and made accessible. It paints a broad picture of how inventors can push the limits of present knowledge and how these advancements can be shared. Over 300 years later, and scientists continue to scramble to create platforms for greater data storage to record and hold all the information that has yet to be shared.

4. He Wanted to Solve Future Problems

“Nature has established patterns originating in the return of events, but only for the most part. New illnesses flood the human race, so that no matter how many experiments you have done on corpses, you have not thereby imposed a limit on the nature of events so that in the future they could not vary.”

According to Leibniz, humanity would never run out of problems that needed solving, and thus humans must create mechanisms that could solve for future challenges. Leibniz constantly spoke of the future, reminding colleagues that not only were the possibilities endless, but it was an inventor’s responsibility to prepare for as many of those possibilities as feasible. He attempted this through identifying patterns and forming calculations and was one of the first to see binary sequencing as a means for prediction and preparedness.

While Leibniz could not have imagined today’s computer, he does describe its functionality in the work of a scientist. His many invented calculators reflect his interest in expanding the output of scientists by advancing their tools, and what possibilities would come from such technological luxuries. It’s not surprising that these quotes reveal a mathematician preoccupied with future possibilities, as his inventions went on to solve problems that he himself would never fathom.

More like this
Science
8.18.2022 2:27 PM
Wastewater can track viruses like Covid-19 — can it do the same for superbugs?
By Allison Parshall
Innovation
8.11.2022 11:00 AM
“Quantum materials” could give the human brain a run for its money, scientists say
By Nathaniel Scharping
Innovation
8.15.2022 8:30 PM
This high-tech camera may help protect our identities — here's how it works
By Molly Glick
Related Tags
Share: