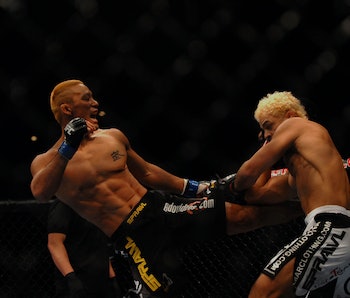 Amid the chaos of UFC, a fascinating sense of order has been revealed. An analysis published Tuesday by researchers at the UFC Performance Institute, a facility devoted to training the nearly 600 independent super-athletes who fight in the league, unveils a blueprint of what the perfect UFC fighting specimen should be capable of — both inside and out.

The definition of mixed martial arts (MMA) provided by the UFC Performance Institute in the paper, dramatically titled “A Cross-Sectional Performance Analysis and Projection of the UFC Athlete,” underlines how well-rounded a UFC fighter has to be in order to compete. A fighter must have “high force-generation qualities” and “the ability to withstand collisions” — in other words, “highly powerful movements”. But the athlete also requires the ability to withstand five exhausting rounds of being relentlessly attacked, which requires a certain amount of endurance.

Physiologically, these are two very different abilities that require completely different energy systems: the anaerobic energy system, used for fast explosive movements that generate a lot of force, and the aerobic energy system, which allows the fighter to last a full five rounds. In the 45-page study, which takes into account training data of 300 fighters over the course of a year, the team lists the numerical benchmarks that the best athletes in the Institute were able to reach. The athlete the data describe seems almost superhuman.

The report quantified the aerobic capacity of a UFC fighter by measuring VO2 max, which is simply the maximum amount of oxygen your body can deliver to your muscles during exercise. A study in 2000 published in the British Journal of Sports Medicine that measured the VO2 max of 26 professional cyclists found that the average was somewhere around 72.6. That’s about as elite as it gets: A “superior” VO2 max, as measured by most fitness watches, is roughly 60.

According to this report, a world-class flyweight — like reigning title holder Demetrious Johnson — would be expected to have a VO2 max around 71.7. And that’s not even the most important energy system in his repertoire.

The report went on to measure the ventilatory threshold (VT2) of athletes in the UFC to examine their anaerobic fitness — their ability to do short bursts of high-intensity activity where the body requires more oxygen than it actually has in its bloodstream. When the body does anaerobic exercise, it produces lactic acid (which is what causes muscle soreness after a heavy workout). VT2 is a measure of how the body deals with byproducts of lactic acid, like carbon dioxide.

In the report, the researchers used VT2 as a measure of the anaerobic energy system in UFC fighters, calling it “perhaps the most critical threshold for MMA fighters”. Unlike VO2 max, a smaller number is better when it comes to VT2.

The report says that a UFC fighter as athletic as Demetrious Johnson should have a VT2 around 59.6. A “bad” ventilatory threshold for the UFC, according to this study, is around 445. For comparison, a 2017 study on professional basketball players in the Journal of Sport and Health Science showed a ventilatory threshold of 45.4, on average. While it’s not a perfect comparison, basketball is defined by that study as an “intermittent high intensity physical activity” and provides a rough reference point for how insane the numbers UFC fighters put out are.

These two measurement only scratch the surface of the report’s enormous data analysis. But it’s a jumping-off point for future insight and appreciation of these extremely athletic fighters, especially as the UFC starts to come into its own.