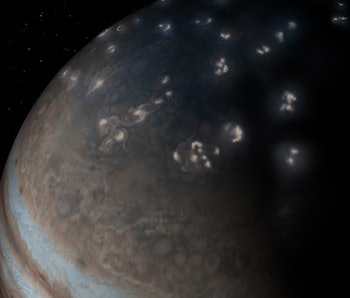 Jupiter is nothing but clouds, a mass of gas floating in space. So, the question of how lightning storms exist there (or, for that matter, on the “Cloud City” planet Bespin, in Star Wars) has intrigued scientists ever since NASA’s Voyager 1 probe first sent back evidence of Jovian lightning in March 1979. That data — visible light and radio signals produced by the bolts’ electrical discharges — suggested that lightning there is different from that on Earth. Now, after 39 years, a NASA study sheds light on the true nature of Jupiter’s mysterious bolts.

For the past two years, NASA’s Juno space probe has been arcing by Jupiter, swinging close enough to the gas giant’s cloud cover to solve the mystery. Juno’s findings, described in the Nature paper published Wednesday, suggest that most of NASA’s head-scratching in 1979 was warranted: Jupiter’s lightning seemed different than Earth’s because the data showed only a part of the picture. “No matter what planet you’re on, lightning bolts act like radio transmitters — sending out radio waves when they flash across a sky,” according to a statement released Wednesday by lead author Shannon Brown, Ph.D., a researcher at the Airborne Science Program at NASA’s Jet Propulsion Laboratory. NASA’s 39 years of confusion, it seems, may come down to the fact that early probes were unable to detect the relevant waves.

The original Voyager 1 data showed that Jupiter’s lightning had a curious gap in the megahertz and gigahertz ranges typical of lightning here on Earth. In particular, the data showed only emissions in the low-frequency kilohertz range; on Earth, lightning emissions are usually measured in the high-frequency gigahertz range. Juno’s sensitive Microwave Radiometer Instrument (MWR)’s recordings of the planet’s electromagnetic emissions, however, show that the relevant emissions were always there. The key was swooping close enough to the lightning to get a closer look.

“In the data from our first eight flybys, Juno’s MWR detected 377 lightning discharges,” says Brown. “They were recorded in the megahertz as well as gigahertz range, which is what you can find with terrestrial lightning emissions. We think the reason we are the only ones who can see it is because Juno is flying closer to the lightning than ever before.” Specifically, Juno reached within 3,000 miles of Jupiter’s cloud cover at the closest point in its orbit. Another reason that Juno’s MWR succeeded where many previous satellite probes — like Voyagers 1 and 2, Galileo, and Cassini — failed is, in part, because it was listening to Jupiter’s electrical storms on a radio frequency capable of passing through the charged particles in the planet’s ionosphere. (“The measurements were at 600 MHz,” Brown said in an email to Inverse.)

The new data puts to rest an older theory attempting to explain why previous probes circling Jupiter were not able to pick up megahertz or gigahertz signals: In 1985, French astrophysicist Philippe Zarka, Ph.D. speculated in an Astronomy and Astrophysics letter that Jupiter’s lightning only produced those lower-hertz range signals because it moved eerily slow compare to Earth lightning. That strange explanation can be shelved now, but there are still truly unusual things about Jupiter’s lightning. All lightning is formed, in part, as a reaction to heat, which is one of the reasons that lightning on Earth strikes most at points near the equator. But on Jupiter, the heat from the sun along the equator merely cancels out the heat emanating out from the planet’s hot core. The result is that lightning strikes most on Jupiter at the poles, where the hot/cold fronts from the core and the upper atmosphere provoke the most turbulence.

Juno will continue to collect data from Jupiter until at least July 2021, thanks to a recent extension from NASA, a good thing given that the findings continue to produce new questions. For example: “Even though we see lightning near both poles,” Brown asks, rhetorically, “why is it mostly recorded at Jupiter’s north pole?”