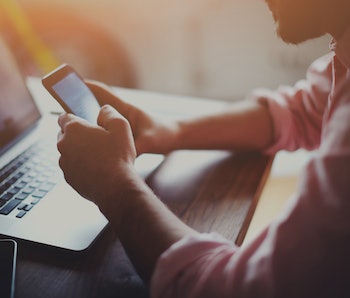 We’ve all been there: You have work to do, but instead, you spend 45 minutes scrolling on Twitter or digging back so far on Instagram that you find yourself critiquing photos from your coworker’s friend’s brother’s Caribbean vacation in 2013. There’s good news, though: In a new paper, researchers argue that browsing the web on company time, a practice called “cyberloafing,” is actually a good way to deal with boredom.

In the paper published Tuesday in the journal Computers in Human Behavior, a team of researchers tried to capture a picture of workers’ boredom and monotony, as well as the resulting mental strain from these two factors. So, they conducted a study in which 463 university employees with a range of roles reported on their workloads, the boredom they experience at work, and their on-the-clock internet habits. They observed a significant relationship between cyberloafing and work underload, as well as one between boredom and cyberloafing. Interestingly, they differentiate between cyberloafing and so-called “counterproductive work behavior,” and they show that boredom is more likely to lead to the former than the latter.

All in all, this paper paints a picture of cyberloafing as a behavior that can help workers cope with the boredom of not having enough to do and not as a behavior that gets in the way of workplace productivity. The researchers, from the University of South Florida and the University of Haifa in Israel, clearly differentiate between cyberloafing, which is relatively harmless, and counterproductive work behaviors, which can be harmful for the individual and the workplace.

“The behaviors reported by the most people … include visiting non-work related websites and using personal email as the most common cyberloafing behaviors, and complaining about insignificant things at work and ignoring someone at work [as] the most common CWBs,” the study’s authors write. “Workplace boredom is an important negative well-being consequence of underload, and our study conceptualizes cyberloafing as a boredom-coping mechanism rather than a counterproductive work behavior.”

This study was just an observational one that investigated a few broad connections, so future studies should explore the different reasons for workers’ underload and how exactly they relate to the consequences, the authors note. They also predict that future studies could reveal the unexplored benefits of work underload, such as innovation and workplace socialization that builds community.

This isn’t to say that you should spend all day recreating famous Vines in Fortnite or striking out on Tinder, but it does suggest you shouldn’t beat yourself up for spending a couple minutes on Instagram after lunch. In fact, maybe your boss should thank you for self-regulating your boredom.

More like this
Mind and Body
8.6.2022 1:00 PM
The 8 Best Apple Watch bands for working out
By Vanessa Spilios
Science
15 hours ago
In Mexico, indigenous peoples and scientists race to save an iconic Aztec animal
By Lourdes Medrano and Undark
Science
14 hours ago
Look! Extreme Tonga volcano eruption leaves a telltale finger-print in space
By Doris Elín Urrutia
Related Tags
Share: