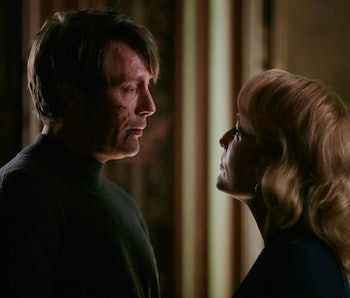 You’ve got to hand it to any show in which one of the main characters using a bone saw to open the other main character’s head is not the most significant plot point in an episode. Hannibal has gotten so outrageous and violent that, in the space of one 43-minute span, we’ve now got a shooting, a character getting addicted to opiates, a kaleidoscopic lesbian sex scene, a baby plot, a sort-of dinner party, some at-home surgery, and then, after all of that, a mighty big reveal. It would seem the showrunners have taken David Byrne’s advice and stopped making sense.

Sure! A show so densely populated with serial killers only ever made internal sense anyway. Now those insides are just getting ripped out.

Not only did “Dolce” jettison the Hannibal is wounded and weak narrative that has come to the fore, it continued the assault on Will Graham, who seems to be the focal point of the universe’s hatred. Hugh Dancy must be getting pretty damn close to his makeup people because he is covered in blood, bulletholes and, now, skull fragments at pretty much all times. Being hung from a meathook at the end of the show for the pleasure of a demented millionaire was probably the best thing that happened to him, and presumably the only thing that kept him from being forced to eat his own mind (a la Ray Liotta in the movie).

What the episode accomplished — other than providing a lot of plot static — was the tricky task of getting Will Graham and Hannibal on the same side. Now that they both have been delivered to comically evil burn-victim Mason Verger, they’ll be forced to work together, which is a pretty fun dynamic given that Hannibal has been quite clear about his murderous intentions. Graham is going to have to play nice without letting Hannibal play dirty — and no one has succeeded at that just yet.

If, structurally speaking anyway, Mason Verger is the big bad, Hannibal is now Batman, and Graham is now Robin. Again, not a bad dynamic. The only potential problem here is that Will is clearly on the verge of losing it (for good reason) and watching Dancy pout can get a bit dull. That said, watching Hannibal seek revenge is not dull at all. There will, we can safely assume, be just a ton of blood. If that’s not your thing, you should have never been watching this show and you should definitely tune out right about now.

More like this
Mind and Body
12 hours ago
What scientists know — and don’t know — about the Langya virus
By Miriam Fauzia
Mind and Body
8.8.2022 12:30 PM
One type of walking reliably boosts fitness more than any other
By Lindsay Bottoms and The Conversation
Mind and Body
8.7.2022 7:00 PM
Repairing America’s underground infrastructure reveals an unsettled scientific debate
By Robin Lloyd and Undark
Related Tags
Share: