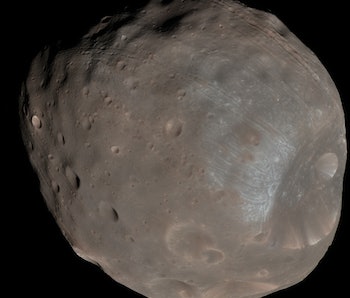 Mars has two large, terrible adult sons named Phobos and Deimos. They are very dopey and utterly pointless moons that look like a toddler’s rendition of a potato or rotten egg. But the mystery of their origin has eluded scientists for years, leading some to investigate with new computer simulations.

In a new study published Wednesday in Science Advances, researchers at the Southwest Research Institute (SwRI) find that Phobos and Deimos were indeed created as the result of a protoplanet smashing into Mars billions of years ago, as other research has suggested, but the impactor in question was probably much smaller than previously thought.

“We used state-of-the-art models to show that a Vesta-to-Ceres-sized impactor can produce a disk consistent with the formation of Mars’ small moons,” the paper’s co-author Julien Salmon, an SwRI research scientist, says in a statement. “The outer portions of the disk accumulate into Phobos and Deimos, while the inner portions of the disk accumulate into larger moons that eventually spiral inward and are assimilated into Mars. Larger impacts advocated in prior works produce massive disks and more massive inner moons that prevent the survival of tiny moons like Phobos and Deimos.”

If these simulations are correct, it didn’t take much to create Mars’ moons. Salmon provides two objects for comparison: Vesta, a minor planet, and Ceres, a dwarf planet. Their diameters are 326 miles and 587 miles, respectively. For context, Texas is about 660 miles wide and 790 miles long.

Understanding Phobos and Deimos is actually pretty pertinent for scientists at the Japan Aerospace Exploration Agency (JAXA). In 2024, the agency is launching the Mars Moons eXploration (MMX), which set to stop by Phobos and Deimos, and will collect a piece of Phobos’ surface and bring it back to Earth for study in 2029.

In a broader sense, this research gives us a new lense on Mars — it’s still a lovable weirdo of a planet and a bit of a mystery! On May 5, NASA will send its Insight lander to the surface of the red planet, in order to study earthquakes on Mars, AKA marsquakes. While it won’t be visiting Mars’ moons, at least we’ll get more information on the planet’s past.

Until then, stay golden, Phobos and Deimos, you big, beautiful idiots.

More like this
Science
7.26.2022 6:44 PM
Mars Express: New images reveal the depths of the red planet's largest canyon
By Jennifer Walter
Science
7.27.2022 11:00 AM
The Webb Telescope might confirm if one of Saturn’s moons has ingredients for life
By Kiona Smith
Science
8.5.2022 12:15 PM
10 years ago, the Curiosity rover arrived on Mars — and revolutionized the hunt for alien life
By Allie Hutchison
Related Tags
Share: