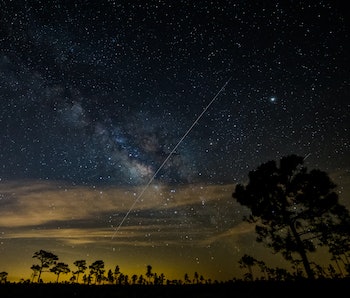 Our (already large) Milky Way galaxy might be getting even more gargantuan at a surprisingly quick rate, according to new research.

Cristina Martínez-Lombilla, a doctoral candidate at the Astrophysics Institute of the Canary Islands posits the Milky Way is actually growing at a rate faster than the speed of sound thanks to new stars rapidly forming within it. She and her team presented their work at the European Week of Astronomy and Space Science conference in Liverpool, England on Tuesday.

“Our work shows that at least the visible part of [the Milky Way] is slowly increasing in size, as stars form on the galactic outskirts,” Martínez-Lombilla explained. “It won’t be quick, but if you could travel forward in time and look at the galaxy in 3 billion years’ time, it would be about 5 percent bigger than it is today.” In space years, that’s not so far off.

The Milky Way already encompasses approximately 100,000 light-years in diameter, though it’s difficult for scientists to know precisely how big it is. So instead of attempting to measure the Milky Way itself, the research team analyzed the shape and reach of other spiral galaxies similar to our own. By measuring the light originating from young blue stars, along with their vertical movement, they were able to calculate their moving rate away from the places they were born.

This led Martínez-Lombilla and her team to conclude that those galaxies were growing in size, and that the Milky Way will follow suit as time goes on. Think of it as planetary trend-setting or pattern-spotting.

According to the new findings, this growth also predicts the inevitable enlarging of Milky Way so much that it will collide with our neighboring Andromeda Galaxy, which is about 2.5 million light-years away from us right now. Thankfully, that cosmic collision won’t happen for about another four billion years.