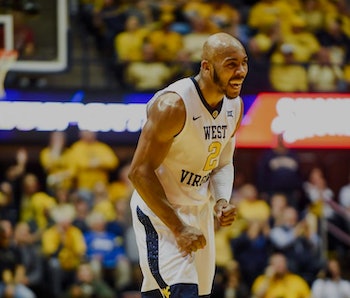 The single most intriguing match-up of the second round unfolds in San Diego on Sunday, as the in-state rivals West Virginia and Marshall play for the first time since the acrimonious end of their annual series a few years ago.

The fifth-seeded West Virginia Mountaineers are the clear favorites here, having been one of the best teams in the Big 12 and finding little trouble with opening round opponent Murray State. But coach Dan D’Antoni’s 13 seed Marshall Thundering Herd looked damn good in taking down the Wichita State Shockers in a, well, shocking opening upset. Now it’s time to just let the bad blood simmer.

To predict the result of this and other games, Unanimous A.I. used what’s known as swarm intelligence to forecast the bracket. About 50 college basketball fans worked together as a hive mind to make picks. As you can see in the animation below, each participant controlled a little golden magnet and used it to drag the puck toward the answer they thought was the most likely outcome. As the users saw the puck move toward a particular outcome, it triggers a psychological response. They readjust their decision-making, building toward a consensus.

Picking before the tournament, the hive mind picked Wichita State to beat Marshall, perhaps fearing what an exclusively West Virginia second round game would entail. But here we are, and it’s worth noting the swarm still picked the lower-seeded Mountaineers to beat the Shockers, albeit with low confidence and 77 percent brainpower. That’s probably a general vote of confidence in West Virginia.