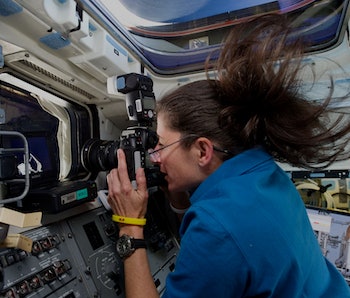 Movies like Gravity and Interstellar give the impression that living in space is stressful and intense all the time. But for all the hardcore data collection and research that astronauts do while they’re at the International Space Station, they still manage to enjoy plenty of downtime, retired NASA astronaut Nicole Stott tells Inverse. Astronauts — they’re just like us, right?

They have a good time, sure. But when Inverse asked Stott at the New York premiere of the National Geographic series One Strange Rock what constituted “fun” for the crew on the ISS, her response put our usual Friday night antics to shame.

Stott, who retired from NASA in 2015 after two spaceflight missions (including one long-duration mission to the ISS), is one of eight astronauts involved in One Strange Rock, executive produced by Mother! director Darren Aronofsky and hosted by Will Smith.

In the series, which is also executive produced by Jane Nutt and Nutopia, Stott joins NASA astronauts Mae Jemison, Jeff Hoffman, Leland Melvin, Mike Massimino, Peggy Whitson, Jerry Linenger and Chris Hadfield in describing the way their relationship with the Earth changed after they left it behind for life in space. One theme ties together all of their stories: Being so far removed from Earth really intensifies your connection with it and its inhabitants.

The curious thing, she explains, is that life on the ISS is a microcosm of what life could be like on Earth if all humans felt that connection. The way she describes a “fun” night there sounds pretty idyllic.

“I think about that now: ‘Around the dinner table’ has a totally different meaning,” she says. “You’re all floating at different angles. We have this little table you can stick stuff to, you’re not really eating off of it. But those are some of the best conversations I remember, just being up there with my crew mates from all over the world, solving the world’s problems, what we would do if we were down there. Those kinds of things. Speaking ‘Russglish.’”

Of course, not all the fun moments are so deeply emotional, she points out.

“We never really had a games night,” she says. “I mean, we did watch movies and stuff.”

More like this
Innovation
8.9.2022 2:00 PM
A small robot on the ISS will practice performing surgery in space
By Doris Elín Urrutia
Science
8.7.2022 11:00 AM
Webb Telescope discovers an “amazing” galaxy from the edge of time
By LAURENCE TOGNETTI and Universe Today
Science
8.6.2022 11:00 AM
450 million years ago, Earth’s magnetic field almost collapsed — the results would have been apocalyptic
By CAROLYN COLLINS PETERSEN and Universe Today
Related Tags
Share: