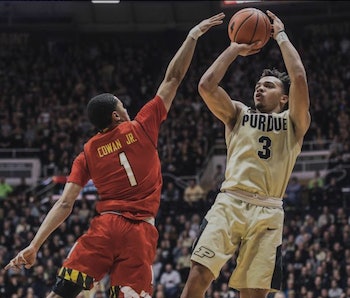 The Purdue Boilermakers have just wrapped up a great regular season that has them positioned as a number two seed in March Madness. Can they avoid a shocking upset at the hands of 15-ranked Cal State Fullerton?

If you’re a fan of the three-point shot, is this ever the game for you: The Boilermakers shoot a tourney-best 42 percent from behind the arc, while the Titans give up more than their fair share of treys. A hive mind of fans predicts who will win.

The hive mind is highly confident that Purdue will conquer this match. The swarm made this prediction with 95 percent of its brainpower, making the chances of an upset pretty unlikely.

The game tips off on Friday at 12:40 p.m. Eastern in Detroit on truTV.