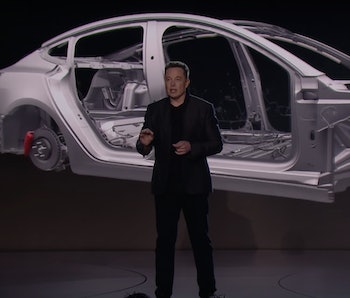 President Donald Trump’s recent call for major new tariffs on steel and aluminum imports has proven almost universally unpopular, with the stock market, American allies, establishment Republicans, and even his newly former chief economist all coming out in opposition.

But the president may have one major ally in his calls for greater economic protectionism, particularly in the context of Trump’s push to reduce China’s trade deficit with the United States by a billion dollars. Tesla CEO Elon Musk took to Twitter Thursday to ask Trump his thoughts on the two countries’ divergent rules on car import and ownership rules.

“Do you think the US and China should have equal and fair rules for cars?” Musk tweeted in reply to Trump’s latest latest call for action. “Meaning, same import duties, ownership constraints, and other factors.”

By Musk’s reckoning, the currently unfair and unequal rules include a massive difference in the import duty on cars shipped between the two countries. An American-made car — like, say, a Tesla — will have to pay a 25 percent tariff when shipped to China, but a Chinese car delivered to the United States only requires a 2.5 percent tariff.

Musk said he’s not necessarily looking for the kind of America-first protectionism that Trump’s trade policy advocates, but rather for greater fairness in how the two countries treat each other’s car imports.

Musk said this issue had previously been discussed — whether by Tesla specifically or American automakers in general isn’t clear — during Barack Obama’s presidency, with no results. Beyond the far greater cost of exporting American cars to China, Musk also pointed to the very different rules in factory ownership.

Tesla would not be able to own a controlling interest of a hypothetical Chinese Tesla plant, whereas there are already five fully Chinese-owned electric vehicle companies operating in the United States by Musk’s reckoning. For instance, the Shanghai-based SAIC Motor opened a North American operations center in Michigan back in 2012.

“I am against import duties in general, but the current rules make things very difficult,” Musk concluded. “It’s like competing in an Olympic race wearing lead shoes.”

Musk has long been uncomfortable speaking publicly on social or economics topics that he frames as strictly political issues, which is part of the reason his short-lived tenure on Trump’s American Manufacturing Council was such obvious public torture for the Tesla CEO.

But Musk unsurprisingly tends to be more forthcoming on policy matters that directly affect his companies, and the prospect of Trump radically changing the nature of America and China’s trade relations could mean big things for Tesla and its cars. If that means speaking the president’s language — a string of indignant tweets, in this case — then so be it.

More like this
Innovation
19 hours ago
Prolific Tesla beta-tester reveals what Full Self-Driving 10.13 needs to fix
By Andrew Moseman
Innovation
8.15.2022 2:00 PM
Tesla software updates reveal a potential roadblock to electric vehicles’ expansion
By Vivek Astvansh and The Conversation
Innovation
8.13.2022 9:00 PM
Want to buy an EV? Here’s what you need to know about the Inflation Reduction Act
By James Morton Turner and The Conversation
Related Tags
Share: