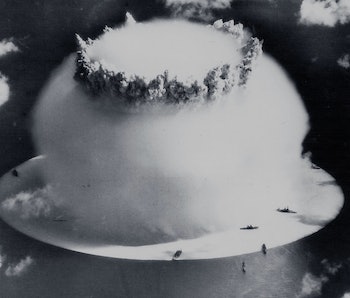 A new trove of documents uncovered at Japan’s Kyoto University detail the efforts of the Japanese government to create an atomic bomb during World War II and illuminate that ultimate counterfactual: What if the Axis got the bomb?

Dated between October and November of 1944 and titled “Ultracentrifugal Separation,” the papers belonged to a researcher named Sakae Shimizu and chronicled the attempts of scientists at the precursor to Kyoto University to separate and enrich uranium-235, a key component to create the deadly blast brought on by nuclear fission.

The fact that both of the main Axis powers were working to produce an atomic bomb during World War II has been known for decades, but actual information is scarce because American forces confiscated much of the research after the war.

Some contend the Japanese nuclear program wasn’t a serious threat, but these papers may hint otherwise. The Japanese were — it would seem — making real progress toward understanding nuclear weaponry. As to whether they could have fabricated a bomb or delivered the payload, that’s another matter. Japan’s non-Pearl Harbor attempts to bomb America were largely limited to atmospheric balloon programs that didn’t really work.

The documents themselves were discovered by Akira Masaike, a current professor who worked in the same research center as Shimizu.

More like this
Culture
8.6.2022 11:38 AM
60 gifts under $25 on Amazon that'll go over well no matter what
By Christina X. Wood and Cassandra Seale
Gaming
7 hours ago
Ikumi Nakamura won E3. Now she wants to fix the games industry
By Jen Glennon
Innovation
8.15.2022 1:33 AM
47 popular home upgrades people are making that are under $35 on Amazon
By Christina X. Wood
Related Tags
Share: