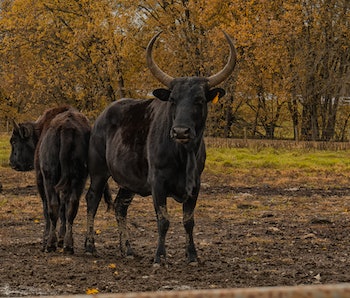 Earlier this week, social media cheered the news of a cow in Poland that escaped in November 2017, only to reappear with a herd of bison in the 350,000 acre Bialowieza Forest between Poland and Belarus.

The cow was first spotted by a Polish ornithologist named Adam Zbyryt, who told Poland’s TVN24, “It’s not unusual to see bison near the Bialowieza Forest, but one animal caught my eye. It was a completely different light-brown shade from the rest of the herd. Bison are chestnut or dark brown.”

Then, it was spotted again by Polist bison expert Rafal Kowalczyk, the director of the Mammal Research Institute at the Polish Academy of Science, who snapped a picture that has since gone viral.

One of the comments on Kowalczyk’s photos reads, “Next time when I think that something stops me from fulfilling my dreams, I will remember the cow who became a bison” — and this seems to sum up the sentiment on social media.

While the photos are adorable, the situation is not going to be cute forever.

Kowalczyk says that while the cow is safe among the herd for now, as it protects her from becoming the prey of wolves, if she were to mate with a bison, the resulting hybrid calf that would be much larger than a normal calf, might be too large for her to safely deliver.

But a hybrid cow-bison, called a “beefalo” (also called the “cattalo”] in the United States, could also have negative effects on the natural environment, as well as detrimental effects on the gene pool of Europe’s bison population, which has been slowly recovering from the brink of extinction as a result of over-hunting during World War I. By 1927, there were no wild bison populations at all, and only 54 in captivity.

Those numbers have risen due to careful conservation efforts and, by the end of the 2015, the European Bison Conservation Center estimates that the numbers have now grown to 6,083 individuals. The introduction of cow genetics into the small bison population of 600 within the Bialowieza Forest would be, however, dangerous for the bison herd.

For now, the rebellious cow will be allowed to stay with its newly adopted herd, in part because it is still too young to breed, but it will be removed by summertime to prevent the risk of mating.

It was great while it lasted — and thanks to its viral portraits on the Internet, the memory of the cow that dreamed will, on social media at least, live on.