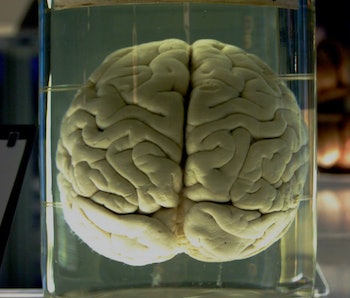 Attention mad scientists: the government is looking to build a brain.

According to a recent job posting, the Office of the Director of National Intelligence (ODNI) is seeking a postdoctoral fellow to study the mechanisms of biological neural networks (read: brains) and determine the most efficient ways to deceive them.

The language of the posting is clinical and detached. But make no mistake — this could be some sinister stuff.

Basically, ODNI wants a researcher to create a biological analogue to an image-classifying adversarial neural network (ANN). An ANN “is trained to classify images (or other data) at a high level of accuracy. An adversarial attack manipulates the image very subtly and causes the ANN to misclassify the image with a high degree of confidence,” according to the job posting.

Similar experiments have been conducted by Google scientists involving AI. An artificial neural network was trained to create portraits of faces, and another network was trained to identify them as real or invented. The first network’s goal was to fool the second network. So every time the generative network was unsuccessful, it make some minor tweaks to the portrait it created. Every time the classifying network was unsuccessful, it tweaked the criteria it was examining to make the judgement. Working against each other, both networks incrementally became more sophisticated and competent at their tasks.

The ODNI wants someone who can find out if biological neural networks are susceptible to similar deceptions, the way that an artificial classifying neural network can be tricked by a generative one.

It is possible for the brain to improperly categorize images. For example, certain visual stimuli can mislead the brain into perceiving something that isn’t there, like an optical illusion, or a case of pareidolia, where people see recognizable patterns in random things. Studying the mechanisms responsible for these phenomena on a neuronal level could help researchers determine if there are ways to make the brain more resilient against these kinds of stimuli. Or, perhaps, if are there ways to make a brain more susceptible to perceptual tomfoolery.

One way to find out is to build a brain yourself, train it to recognize and classify images, and then get to work manipulating it. At least, those are the suggested first steps by the ODNI. According to the posting, however, the ODNI is, “open to all approaches.”

Other positions opening at the ODNI include making tiny robots that can maneuver in tight spaces and over rough surfaces, and manipulate objects with “dexterity and high forces,” and another job aimed at modeling “insider threat” (double agent) behavior with neural nets.

More like this
Science
8.6.2022 11:00 PM
Senior dogs could help us understand an incurable brain condition
By Lesley Evans Ogden and Knowable Magazine
Innovation
8.5.2022 11:00 AM
Alexa could diagnose Alzheimer’s and other brain conditions — should it?
By Joanna Thompson
Innovation
8.11.2022 11:00 AM
“Quantum materials” could give the human brain a run for its money, scientists say
By Nathaniel Scharping
Related Tags
Share: