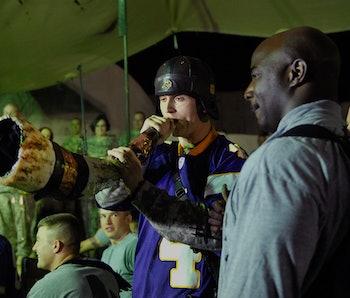 Both the Philadelphia Eagles and Minnesota Vikings are looking to win their first ever Super Bowl, but first they just have to get there. Which team will emerge victorious in the NFC Championship Game? A hive mind of about 50 NFL fans predicts the Vikings will win, along with plenty more about just how the game will play out.

The Philadelphia Eagles remain extremely not the same team they were before star quarterback Carson Wentz went down with an ACL injury, but the team was just good enough to survive the Atlanta Falcons last week and earn the right to host the NFC title game in Philly. The Vikings pulled out a miracle victory on the final play against the New Orleans Saints, and now they’re looking for a chance to make the Super Bowl for the first time since the 1976 season — a Super Bowl that’s being played in Minnesota, no less. It’s a deeply weird matchup, with career backup Case Keenum having turned into a borderline Pro Bowler while leading the Vikings to their best season in years, whereas Philly is just trying to see what it can get out of career backup Nick Foles in relief of Wentz.

To predict the result of this and other games, Unanimous A.I. used what’s known as swarm intelligence to forecast the week’s slate. About 50 NFL fans worked together as a hive mind to make picks. As you can see in the animation below, each participant controlled a little golden magnet and used it to drag the puck toward the answer they thought was the most likely outcome. As the users saw the puck move toward a particular outcome, it triggers a psychological response. They readjust their decision-making, building toward a consensus. Here’s Unanimous A.I. founder Louis Rosenberg explaining swarm intelligence at a recent TEDx Talk.

The swarm predicts the Vikings will win, though only with low confidence and 83 percent brainpower.

The hive mind predicts Minnesota will win by four to six points, with 86 percent brainpower behind that choice.

While the correct answer to the question of which team has the better quarterback is “Philly, but Carson Wentz is on the sidelines,” the swarm’s answer among those available to play is Minnesota’s Case Keenum. He has put together almost an entire season of high-level play, whereas Nick Foles has struggled in his emergency starter role. The swarm made the pick with high confidence and 80 percent brainpower.

The hive mind predicts Minnesota will win the turnover battle with high confidence and 81 percent brainpower.

The swarm feels really confident that Minnesota’s defense will dominate the game Sunday, with 90 percent brainpower behind that choice.

The swarm picks Mike Zimmer and the Vikings coaching staff to have the better game plan here, though only by a little and with 77 percent brainpower.

More like this
Innovation
8.11.2022 11:00 AM
“Quantum materials” could give the human brain a run for its money, scientists say
By Nathaniel Scharping
Innovation
8.5.2022 11:00 AM
Alexa could diagnose Alzheimer’s and other brain conditions — should it?
By Joanna Thompson
Innovation
21 hours ago
Mars City: 3 Red Planet resources could forge a critical building material
By CAROLYN COLLINS PETERSEN and Universe Today
Related Tags
Share: