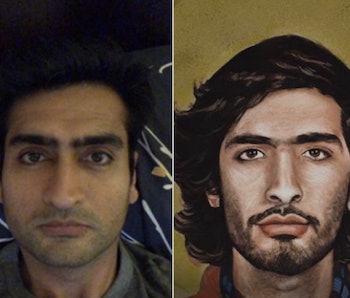 Although the Google Arts and Culture app has been around since 2016, it wasn’t until this long weekend people started to really pay attention to it. The app launched a new “face match” feature the pairs your selfie with an array of portraits found in one of thousands of art museums located across 70 countries around the world. This is easily the most enjoyable notch in the doppelgänger trend that’s taken over pop culture over the last few years, and it’s taken the internet by storm.

If you’ve been on social media recently, chances are very good you’ve seen your friends and famous people you follow posting which portraits they’ve been matched up with. Face match is powered by an algorithm that uses facial recognition systems to detect one’s own face, create a “faceprint” that identifies unique attributes, and pairs those up with attributes found in paintings the Arts and Culture app has access to.

The result is a ton of people having a ball with the new app.

Why exactly Google Arts and Culture’s Face Match generating so much buzz? There are a couple immediate reasons we can point. First and foremost, the feature is new — and like any new tool on the internet, users are diving in head-first to play around with it and experiment, and share the results with their friends and followers. And this all fell on a long holiday. Classic internet trend 101.

But another reason has more to do with the Arts and Culture app itself. There’s an undeniable allure to getting the opportunity to find out what sort of decades’ or centuries’ old paintings might strike a resemblance to your own visage. There’s something that feels so fresh in getting to figure out what famous portrait you look like, as opposed to determining a modern-day celebrity look-alike.

Fine art portraits, after all, stand the test of time. They are the kinds of special works preserved for posterity and given a spotlight in institutions dedicated solely to displaying these works for the rest of time. It’s fun to see which of these timeless works one might look like, since it sort of suggests that one’s looks also retain a sense of timelessness.

A lovely side effect of the new feature’s vitality is that the Arts and Culture app itself is getting a ton of renewed attention. People are finally getting an opportunity to take advantage of one of Google’s most ambitious yet most obscure apps available for download and use. The app gives users to opportunity to dig into resources, information, and works found around the world, and get lost in a k-hole of new information.

There’s also the fact that the app is yet another mark forward in facial recognition technology. The face-matching feature works surprisingly fast. More importantly, it doesn’t make a claim that you’re going to get an exact match — the app delivers a few selections, and rates how well it thinks they match up to your own selfie. Yours truly thinks this worked out fairly well, actually.

It’s also been a pretty stellar spark for new memes and jokes.