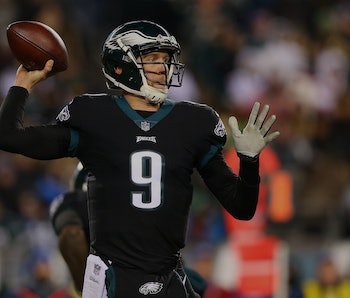 The Philadelphia Eagles have clinched the top seed in the NFC, while the Dallas Cowboys are officially eliminated from playoff contention. That means there’s nothing to play for here, but it’s still one more chance for impromptu starting quarterback Nick Foles to prove he has what it takes for the Eagles to win it all. A hive mind of about 30 NFL fans predicts the Eagles will win.

Nick Foles’s record has been mixed at best filling in for Carson Wentz, who was lost for the season with an ACL injury. The Cowboys figure to play their starters and go for the win if only for pride’s sake, so Foles has another opportunity to show what he’s got ahead of a playoff meeting with one of a whole bunch of dangerous teams, including the Los Angeles Rams, New Orleans Saints, Carolina Panthers, Atlanta Falcons, or Seattle Seahawks. None of those would be easy match-ups for a quarterback who struggled against the Oakland Raiders last week, so best to have a big week here and go into the first-round bye on a high.

The hive mind predicts the Eagles will win with high confidence and 82 percent brainpower behind the choice.

The swarm predicts the Eagles to win by seven to nine points, with 79 percent brainpower behind that pick. The Vegas line favors the Cowboys by 2.5 points.

The game kicks off 1 p.m. Eastern Sunday on Fox.