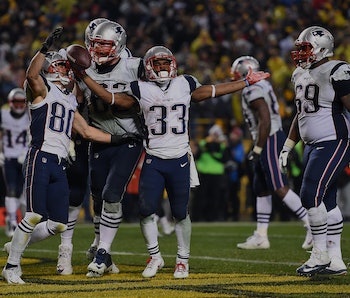 The New England Patriots have clinched the AFC East and have the inside track for home-field advantage through the playoffs. The Buffalo Bills have to keep winning if they want to make it in as a wild card. A hive mind of about 30 NFL fans predicts the Patriots will win Sunday.

The Patriots’ comeback victory over the Pittsburgh Steelers both clinched their record ninth consecutive division title and meant they just have to win out to ensure their number one overall seed. About the worst thing that can happen to the Patriots down the stretch is they lose their first-round bye — not ideal, but not exactly disastrous. The Bills, on the other hand, are desperate to maintain their narrow path to the playoffs, which is going to involve the right combination of other wild card contenders losing and the Bills ending strong. If they want to end their 18-year playoff drought, they almost certainly need to shock the Patriots on the road.

The hive mind predicts the Patriots will win by 10 to 12 points, with 81 percent brainpower behind that pick. The Vegas line has the Patriots by 11.5 points.

More like this
Innovation
23 hours ago
This high-tech camera may help protect our identities — here's how it works
By Molly Glick
Innovation
8.11.2022 11:00 AM
“Quantum materials” could give the human brain a run for its money, scientists say
By Nathaniel Scharping
Innovation
8.5.2022 11:00 AM
Alexa could diagnose Alzheimer’s and other brain conditions — should it?
By Joanna Thompson
Related Tags
Share: