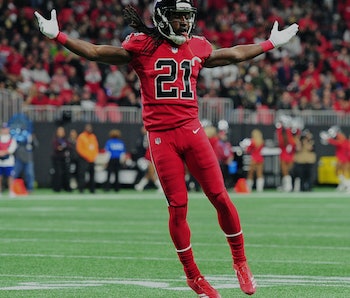 The Atlanta Falcons have won four of their last five games to move squarely back into the playoff picture, and they look to keep the momentum going against the fading Tampa Bay Buccaneers. A hive mind of about 30 NFL fans predicts the Falcons will win Monday night.

The Falcons remain 0-3 against the AFC East and now 8-2 against everyone else, including a 34-20 win over the Buccaneers at home three weeks ago. They now have to head to Tampa in their attempt to pick up the second win on the year against their division rival. While their midseason doldrums looked like the Falcons were struggling with the dreaded Super Bowl hangover, their recent hot streak — including a win over the NFC South-leading New Orleans Saints — has the playoffs squarely in Atlanta’s sights, with a division title not out of the question.

The swarm predicts Atlanta will win with high confidence, with 86 percent brainpower behind the pick.

The hive mind predicts the Falcons will win by seven to nine points, with 90 percent brainpower behind that choice. The Vegas line has Atlanta by six points.