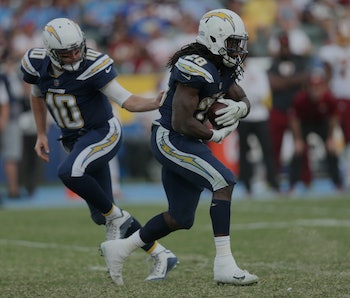 It’s almost too ridiculous. The Kansas City Chiefs started 5-0. The Los Angeles Chargers started 0-4. Yet a pair of wild reversals of fortune have both teams at 7-6, set to face off Saturday night for the AFC West lead. A hive mind of about 30 NFL fans predicts the Chargers will win.

The Chiefs managed to stave off total catastrophe last week by beating the Oakland Raiders, the other AFC West still at least tenuously in the playoff picture. But the fall from 5-0 to 7-6 is disastrous no matter how you look at it, one only compounded by the Chargers going 7-2 over their past nine games to give themselves a chance at stealing a division crown that Kansas City once looked set to run away with.

The swarm predicts the Chargers will win, albeit with low confidence and 84 percent brainpower.

The hive mind sees the Chargers winning by four to six points. The current Vegas line has this as a pick’em, meaning neither team is favored.

The game kicks off 8:30 p.m. Eastern Saturday on the NFL Network.

More like this
Innovation
8.11.2022 11:00 AM
“Quantum materials” could give the human brain a run for its money, scientists say
By Nathaniel Scharping
Innovation
8.5.2022 11:00 AM
Alexa could diagnose Alzheimer’s and other brain conditions — should it?
By Joanna Thompson
Innovation
8.13.2022 9:00 PM
Want to buy an EV? Here’s what you need to know about the Inflation Reduction Act
By James Morton Turner and The Conversation
Related Tags
Share: