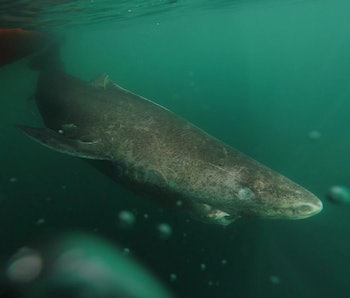 For over 50 years, explorers of the dark waters of the North Atlantic have been aware of the existence of a mysterious shark that grows only a few centimeters every few years — yet can reach lengths of up to five meters. There was only one explanation: these things must be absolutely ancient. For decades, however, the sharks eluded the dogged efforts of scientists to determine their age. But then, the University of Copenhagen biologist Julius Nielsen came along and revealed the sharks’ secret.

Nielsen’s monumental discovery is back in the news again after he posted a photo to his Instagram in early December announcing he had finally completed his Ph.D. thesis — a whopping 142 pages on the Greenland shark. In late November, the New Yorker also dove into the details of his work.

His thesis undoubtedly includes the explanation he gave in his Science article about how he managed to discover the average age of the ancient sharks. Their baseline life expectancy is at least 272 years, he wrote, noting that the biggest known individual — which measured in at 502 centimeters — was estimated to be 392 years old, give or take 120 years. That means the shark could, in theory, be 512 years old.

In that study, he explained how he used a dating method normally reserved for archaeology to exploit a quirk of biology in the shark’s eyeball.

“Our lifespan study is based on the carbon-14 dating of Greenland shark eye lenses,” he said in a statement in 2016. “As with other vertebrates, the lenses consist of a unique type of metabolically inactive tissue. Because the center of the lens does not change from the time of a shark’s birth, it allows the tissue’s chemical composition to reveal a shark’s age.”

Carbon-14 dating relies on the steady decay of carbon molecules into its different, differentiable isotopes (slightly lighter versions of the original molecule). Because carbon-14, a radioactive element, is already known to have a half-life of 5,730 ± 40 years, scientists can measure the amount of carbon-14 remaining in a sample — together with the amount of its isotopes — to determine how long a thing has been on the Earth.

The center of the sharks’ lens, like all tissues in living organisms, contains a lot of carbon, but what Nielsen and his team looked for in particular was the carbon-14 absorbed by the sharks during nuclear testing in the 1950s.

According to Nielsen, using carbon-14 dating to estimate the ages of the sharks was quite unorthodox. “We use well-established radiocarbon methods, but combine them in a new way, he said. “This approach, along with the extraordinary ages for these sharks makes this study highly unusual.”

While the ages of the elusive sharks have now been determined, it’s still unclear how they manage to live that long. Now that Nielsen is about to get his Ph.D., he’ll be in a good position to find out — assuming that, as he hopes, his existing work will aid in the conservation of these mysterious old fish.

If you liked this article, check out this video of an underwater drone for exploring ocean life.

More like this
Science
7.26.2022 10:00 AM
Trap-jaw ants are so powerful they should implode — scientists finally uncovered their secret
By Charles Q. Choi
Science
7.31.2022 1:00 PM
How do cats co-exist with each other? The answer may lie in their gut
By Tara Yarlagadda
Science
7.28.2022 6:00 PM
Meet the tiny critter that pollenates seaweed like a bee
By Jennifer Walter
Related Tags
Share: