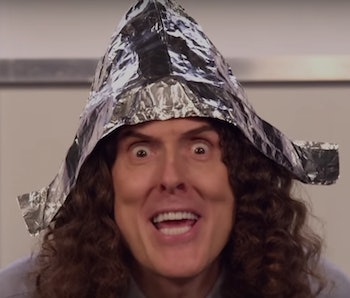 Such was the puzzled response of communications rep Dede Keith in the Texas capitol when a pair of constituents reached out to Gov. Greg Abbott with sheets of sandwich armor. The assumption was that these were more in a flood of letters mocking Abbott’s paranoid order that the Texas State Guard monitor military exercise Jade Helm 15 in case the feds were planning a military takeover of the Lone Star State. Let’s dig a little deeper than the sheeple in the lamestream media.

As the Atlantic has reported, despite their reputation as the preferred headgear of the unhinged, tinfoil hats are actually terrible at shielding your thoughts. The propaganda promises it forms a Farady cage, repelling radio frequencies and electro magnetic radiation. In fact, MIT scientists have found the hats not only didn’t work, since they failed to form a complete covering, they in fact enhance frequencies used for mobile communications and broadcast satellites including (and here the shiver runs through your spine) space-to-Earth satellites. This makes for suspicious present for one of Obama’s biggest critics.

“For your hat!” the note to Abbott said “Thanks for making our state look like idiots!” But no one signed it. Maybe because your handwriting is a dead giveaway when you have to clutch the pen in three, scaly lizard fingers. Maybe not. We’re through the looking glass, people.

More like this
Innovation
8.4.2022 11:30 AM
Look: 9 stunning images reveal a retired satellite's dynamic views of Earth
By Jennifer Walter
Science
8.6.2022 11:00 AM
450 million years ago, Earth’s magnetic field almost collapsed — the results would have been apocalyptic
By CAROLYN COLLINS PETERSEN and Universe Today
Science
8.15.2022 11:00 AM
South Korea just launched a rocket to orbit the Moon, a first for the country
By Nancy Atkinson and Universe Today
Related Tags
Share: