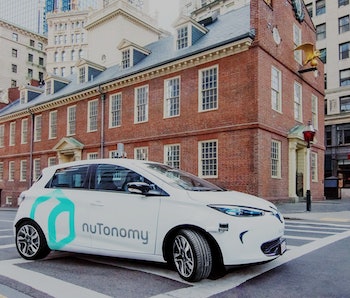 If you’re hanging out in Boston’s Seaport-district this week and call up a Lyft, you might get a taste of what the future of ride-hailing services will look like. It’s one with no drivers required.

After a couple of months of waiting, Lyft and the self-driving car startup nuTonomy finally came through with with their promise to test their autonomous cars in Massachusetts’s capital. The rides begin Wednesday.

That said, if you’re looking forward to not having to make awkward conversation with a driver, don’t get your hopes up just yet. These autonomous vehicles will still have a human in the driver’s seat ready to take the wheel just in case anything goes wrong. If anything, the self-driving function means there will be even more time to focus on chitchat, so here’s hoping only the coolest and/or quietest non-drivers are behind the wheel.

The Massachusetts-based startup nuTonomy has been testing its vehicles in the Boston area for a couple of months already, but this is the first time they’re letting Lyft users take them a test spin. Both companies want to use this test period to get as much feedback from people as possible. So if you’re lucky enough to get paired with one of this shiny new cars, get ready for a full demo of what this tech is capable of.

“Until recently in the US, only nuTonomy’s engineers were able to ride in our Boston-based fleet,” says a nuTonomy blog post. “However, it’s only through public passenger pilots that we can gain objective feedback related to the experience of hailing and riding in an autonomous vehicle.”

While this might seem like a sales pitch, it’s a pretty important first step to get Boston-residents familiarized with this type of technology. In a poll conducted by AAA, a majority of the people surveyed said they were a bit squeamish about riding in a self-driving car. The slow transition strategy that Lyft and nuTonomy are taking could quell some of those fears.

Uber has been testing its own self-driving cars for a while now. This is a huge step in the right direction for Lyft, if it wants to keep nipping at the heels of its competitor.

More like this
Innovation
8.13.2022 9:00 PM
Want to buy an EV? Here’s what you need to know about the Inflation Reduction Act
By James Morton Turner and The Conversation
Innovation
8.9.2022 11:00 AM
This self-healing material could fix your dinged-up car in 30 minutes
By Molly Glick
Innovation
8.8.2022 10:00 AM
A wild new plane-train hybrid could whoosh you to your destination — if it can get off the ground
By Molly Glick
Related Tags
Share: