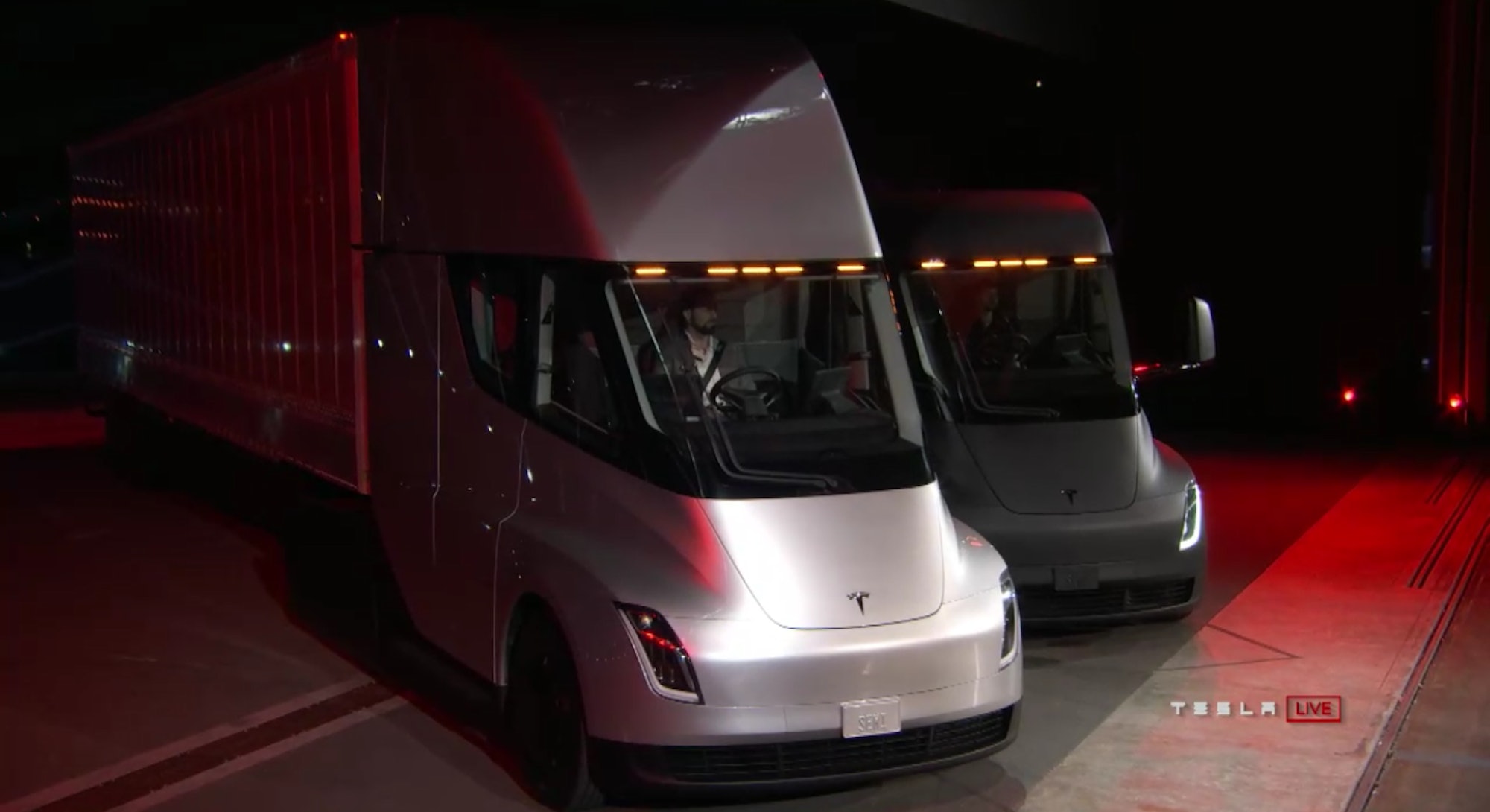 Based on what Musk reveals, the Semi takes all the technology and performance that Tesla has put into its cars and scaled that up to work inside a truck. Many of its specifications sound more like those of a sports car than a diesel truck, along with safety features and economic potential that could prove revolutionary if the company can deliver on them.

“It blows my mind,” said Musk during the unveiling. “I think it will blow yours.”

There’s a lot to unpack from the big reveal, so let’s run down the 10 biggest takeaways.

10. The Semi’s acceleration and top speeds are more sports car than truck

A big point of emphasis throughout the presentation was that the Tesla Semi handles more like a high-performance car than a diesel truck. Case in point: The truck by itself accelerates from zero to 60 miles per hour in five seconds, compared with 15 for a diesel truck. Even when towing the maximum legally allowed weight of 80,000 pounds, the truck accelerates to 60 miles per hour in 20 seconds.

Similarly, the semi can do a maximum speed of 65 miles per hour when climbing a five percent grade, whereas a diesel truck could only manage 45 miles per hour.

“What this means is if you’re pulling a load up the Rockies, you’re earning per mile 50 percent more than you are in a diesel truck,” said Musk. “That’s a gigantic difference.”

The truck’s announced range is 500 miles. That beats previous reports that pegged the Semi’s range at around 200 to 300 miles, but it’s still only half the 1,000-mile range of a diesel truck. Musk elided that point, instead emphasizing 80 percent of trucking routes are 250 miles or fewer, meaning the Tesla Semi could complete a round trip for 80 percent of routes without needing to charge.

“It means you can go to your destination and back, even if your destination has no charging… without recharging,” said Musk. “You can deliver a load out to the middle of nowhere and come back.”

Key to the Semi’s impressive acceleration and speed capabilities is its sleek design. The truck’s drag coefficient is 0.36, which is actually less than the 0.38 coefficient of the Bugatti Chiron, one of the world’s fastest sports car. A diesel truck, by comparison, has a coefficient of between 0.65 and 0.7.

“While a regular diesel truck is more like a barn wall, this is a bullet,” said Musk.

7. The driver sits in the center

Perhaps the most visibly striking element of the Semi’s design is the fact the driver is positioned in the center of the truck, with all passenger seats located behind the driver.

“You’re positioned like you’re in a race car,” said Musk. “You have complete visibility of the road and all your surroundings.”

That placement is a big part of why the truck is easier to drive than its diesel counterparts, according to Musk: “I can drive this thing and I have no idea how to drive a semi.”

6. A network of Tesla Megachargers will provide recharges about every 400 miles

Much like the Supercharger network that supports the Tesla cars, the Semis will stop in at solar-powered Megacharger stations that the company plans to build about every 400 miles.

“The reason 400 miles is important is you have to take a break eventually,” said Musk. “If you drive for five or six hours, that’s about as much as you want to be driving continuously.”

In fact, the United States requires truckers stop for a half-hour every six hours, meaning the Megacharger will be able to fully recharge the truck by the time the mandated 30-minute break is over.

The Megacharger stations will be open at all hours, with Musk guaranteeing low-cost electricity to help keep prices down. Even better, the plan is to keep the Megachargers — and, by extension, all the trucks — off the traditional power grid.

“Because these megachargers are solar-powered, your truck is running on sunlight,” he said.

5. The Semi’s safety features mean an end to a trucker’s worst nightmare

Musk said every Semi will come with enhanced autopilot as a standard feature. The truck will be able to brake automatically if the driver suffers a medical emergency is unable to continue working the controls. The truck is designed to come to a halt and then contact the authorities.

While most of the safety features are an extrapolation of existing Tesla designs, one element is specific to stopping a trucker’s worst nightmare: jackknifing.

“The truck will automatically stop jackknifing because it has independent motors on each wheel,” said Musk. “It will adjust the torque manually on each wheel so that jackknifing is impossible. Your worst nightmare is gone with this truck. You don’t have to worry about it.”

The same independent motors that prevent jackknifing also help the truck running without trouble for far longer. Musk said even just two of the four motors would be enough for the Semi to continue operating more efficiently than a diesel truck. He also pointed out there’s no transmission to worry about, nor do the brakepads need replacing, as the kinetic energy that would normally wear them out is instead harnessed to recharge the battery.

4. The truck is guaranteed for a million miles

The same independent motors that prevent jackknifing also help the truck running without trouble for far longer. Musk said even just two of the four motors would be enough for the Semi to continue operating more efficiently than a diesel truck. He also pointed out there’s no transmission to worry about, nor do the brakepads need replacing, as the kinetic energy that would normally wear them out is instead harnessed to recharge the battery.

3. The glass can withstand a thermonuclear explosion, and there’s a practical reason for that

Musk said the ludicrously overpowered resilience of the windows was his favorite feature, joking that “it survives a nuclear explosion or you get a full refund.” But this isn’t simply flexing on Tesla’s part, as there’s a critical reason the windshields need to be able to stand up to anything.

“Truck windshields are huge and they crack about once a year,” said Musk, pointing out trucks with broken windshields are illegal to drive. That’s a lot of money drivers can then lose out on, so making the windshields essentially indestructible could make or break some drivers’ earnings. “This detail matters a lot to someone who really understands trucking.”

2. The Tesla Semi is designed to already be more cost-effective than diesel trucks — and rail

Musk acknowledged one of the biggest questions was how much the Semi would cost, given Tesla’s well-earned reputation for being expensive. Noting how much the economics matter for trucking, he revealed that from day one the total cost of the Tesla Semi — including leasing, insurance, and all other costs — is an estimated $1.26 per mile, which beats the $1.51 mile he gave for diesel trucks.

The savings get even more substantial if the trucks travel in convoys, where a truck in front blocks the wind and makes those behind it more aerodynamic. Musk said Tesla’s tracking technology makes tighter convoys possible, which means the per-mile savings can be so extensive that even rail can’t compete.

After all that, there wasn’t much left to be said except to provide a release date. Musk revealed the truck begins production in 2019. While that does leave a bit of wiggle room as to when the trucks will actually start being delivered, Musk indicated those who order now will indeed get it by around the end of 2019.

Given Musk’s habit of, let’s say, strategically ambitious promising, 2019 is probably an optimistic estimate, but it’s a decently safe bet the first Semis will be on the road by 2020.