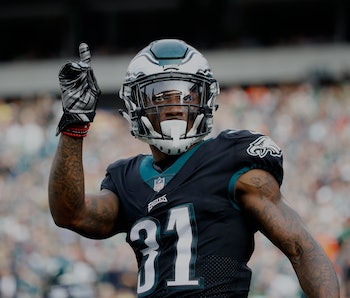 The Philadelphia Eagles banked a league-best 8-1 record before their bye week, and they are looking to build on that as they head to Dallas on Sunday. The Cowboys, for their part, are already on the outside looking in of the NFC playoff picture, so they badly need an upset. A hive mind of about 30 NFL fans predicts the Eagles will win.

It’s hard to draw up a worse set of factors for the Cowboys. Running back Ezekiel Elliott is, after multiple rounds of appeals, finally serving his suspension in connection with a domestic violence incident. The team is banged-up and coming off a tough loss to the Atlanta Falcons, whereas Philadelphia has been resting up. If you’re Dallas, better hope that layoff means rust for a potent Eagles team.

The swarm has little doubt in the Philadelphia Eagles here, predicting a Philly win with high confidence and 85 percent brainpower.

The hive mind likes the Eagles to win by seven to nine points, with 80 percent brainpower behind it. The line right now is less than that, with Vegas favoring Philly by only around 4.5 points.