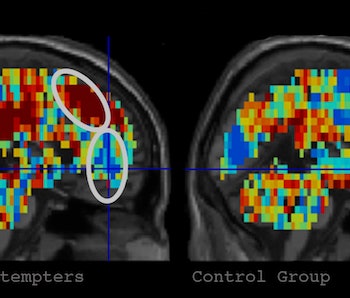 Suicide is the second-leading cause of death among American adolescents, taking the lives of 7 in every 100,000 people aged 15 to 19 each year. Public health interventions focus mostly on prevention, but it’s hard to tell which people are most at risk. However, a breakthrough in brain imaging research, reported in Nature Human Behaviour on Monday, could soon change that.

The team behind the study, led by Carnegie Mellon University psychologist Marcel Just, Ph.D. and University of Pittsburgh psychiatrist and suicide expert David Brent, Ph.D., show that it’s possible to identify people who have thought about suicide — referred to as “suicidal ideators” — from people who haven’t, on the basis of brain scans taken while they think about certain death-related concepts. As they think about words like “death,” Just tells Inverse, their brain scans show specific activity patterns that don’t just identify them as suicidal ideators; they also suggest a way to change those patterns.

“It doesn’t just say, ‘This person is an ideator,’” Just explains. “It says, ‘And here’s what’s different about his or her way of thinking’ to provide a target for therapy.”

The brain activity signatures the team looked at contain what Just refers to as the “emotional component” — the part of a brain activity pattern that indicates an emotion linked to a concept, in the way that one might link snakes with fear. In the study, he and his team discovered several changes in the emotional components of suicidal ideators: the part of the brain associated with sadness, for example, was unusually active when suicidal ideators thought about the concept of “death.” Through therapy, “one could try to ameliorate or maybe even eliminate that alteration — the excessive sadness,” explains Just.

They compared the brains of 17 suicidal ideators — roughly half of which had tried to commit suicide in the past — with their control group by first presenting all of the people in their study with a three sets of concepts to think about while in the brain scanner: suicide-related concepts (like “apathy” and “fatal”), positive words (like “bliss”), and negative words (“gloom,” “guilty”). The words that elicited the most distinctive brain patterns between suicidal ideators and their non-suicidal counterparts were “death,” “cruelty,” “trouble,” “carefree,” “good,” and “praise.”

They fed this data and the associated brain scans into a machine-learning algorithm, in hopes that it would learn to distinguish between the two groups on the basis of the scans alone. Sure enough, it did — identifying with 91 percent accuracy which participants had thought about suicide before.

In their follow-up experiment, the team tested whether the algorithm could identify who had tried to commit suicide in the past from people who had only thought about suicide. It did so with 94 percent accuracy. They’re hoping these methods will someday help clinicians identify people who are most at risk and develop treatments to help them, specifically by targeting their altered emotional components. If a suicidal ideator’s brain scans show that their concept of “death” has an emotional component of “shame,” for example, perhaps future treatment could focus on eliminating that change.

If you liked this article, check out this video on how smoking weed affects your brain.

More like this
Science
8.3.2022 3:44 PM
Ground-breaking technology restores dead organs back to a life-like state
By Miriam Fauzia
Mind and Body
8.3.2022 11:30 AM
The brain’s memory hub may explain why some people get PTSD and others don’t — study
By Miriam Fauzia
Science
7.29.2022 10:00 AM
Which animals get Covid-19? A new database tracks cases around the world
By Jennifer Walter
Related Tags
Share: