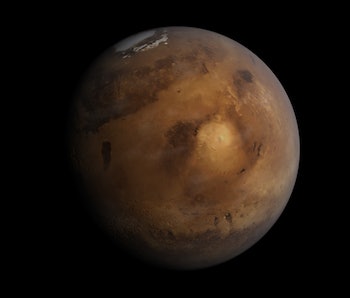 With Halloween on Earth drawing closer, even Mars is getting into the spirit. While there’s no shortage of research about the red planet’s past, a new study focuses on the strange markings currently being left on Mars’ surface. These spooktacular patterns could be the result of the planet’s seasonal changes.

Researchers at Trinity College in Dublin have studied the sublimation of carbon dioxide on Mars, or the process by which something changes from a solid to a gas and skips the liquid phase. After building a chamber that simulates carbon dioxide conditions on Mars, the team found that CO2 on Mars freezes in the winter and melts in the spring, leaving long trenches, or furrows, on the planet’s sand dunes. The researchers’ work has been published in Scientific Reports.

“Mars’ atmosphere is composed of over 95 percent CO2, yet we know little about how it interacts with the surface of the planet,” one of the study’s co-authors Mary Bourke, an assistant professor in geography at Trinity College, says in a statement. “Mars has seasons, just like Earth, which means that in winter, a lot of the CO2 in the atmosphere changes state from a gas to a solid and is deposited onto the surface in that form. The process is then reversed in the spring, as the ice sublimates, and this seasonal interplay may be a really important geomorphic process.”

In order to figure out the correlation between Mars’ seasons and carbon dioxide sublimation, the researchers filled a low-humidity chamber with CO2 blocks on a mock-Martian granular surface. The various experiments confirmed what researchers, including Bourke, had hypothesized — that sublimating carbon dioxide can create squiggly patterns like the furrows and gullies on Mars.

“Several years ago I discovered unique markings on the surface of Martian sand dunes,” Bourke says. “I called them Sand Furrows as they were elongated shallow, networked features that formed and disappeared seasonally on Martian dunes. What was unusual about them was that they appeared to trend both up and down the dune slopes, which ruled out liquid water as the cause.”

This new research builds off other studies that tried to demystify Martian gullies. In 2016, researchers using NASA’s Mars Reconnaissance Orbiter suggested that the gullies were likely formed by the “thaw of carbon dioxide frost,” according to NASA. That research was published in the Journal of Geophysical Letters.

More like this
Science
8.5.2022 12:15 PM
10 years ago, the Curiosity rover arrived on Mars — and revolutionized the hunt for alien life
By Allie Hutchison
Science
8.16.2022 6:00 PM
A new plasma-based technology could be crucial for living on Mars
By Doris Elín Urrutia
Science
17 hours ago
Look! Webb Telescope snaps a startling picture of one of our nearest galactic neighbors
By Kiona Smith
Related Tags
Share: