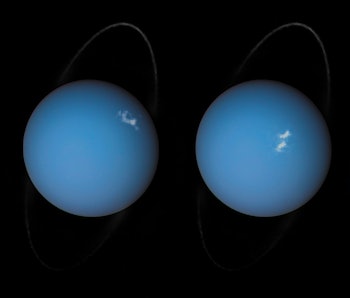 Though gas giants like Saturn and Jupiter tend to hog the media limelight, finally, it’s Uranus’ turn to shine. The unfortunately named planet is in opposition, and an astronomer tells Inverse that tonight’s the best time for stargazers to see it all year.

Something is “in opposition” when a planet — in this case, Uranus — appears to be in the opposite direction of the sun when viewed from Earth. For this reason, stargazers might get to see Uranus in the sky as a blue-green spot, despite the fact that it’s at least 1.6 billion miles (2.6 billion kilometers) from Earth.

“Tonight and tomorrow night are the perfect time to view this greenish planet since Uranus is nearest to Earth at 19 AU,” Edward Guinan, a professor of astronomy and astrophysics at Villanova University, tells Inverse. “Uranus is faint and can theoretically be seen from a dark site and by a person with good eyes who of course knows where to look.”

Those interested can find Uranus by first locating the constellation Pisces, which can be done pretty easily with an app like SkyView. According to Guinan, Uranus should be highest in the sky at midnight local time, and can be best viewed using binoculars or a telescope. If you have neither, just look for the weirdly blue-green spot within Pisces and voilà.

Uranus appears as a blue-green haze because of its methane clouds. This thick haze absorbs colors at the red end of the visible light spectrum, and reflects light at the blue-green end of the spectrum. While you won’t be able to see the planet’s rings tonight with your unaided eyeballs, it’s good enough to get a glimpse at this distant beauty.

So if you love Uranus — or just making it the butt of your jokes — tonight’s your best chance to see it on display, no pun intended. Okay, maybe a little.

If you liked this article, check out this video of what it looks like to land on Saturn’s moon Titan.