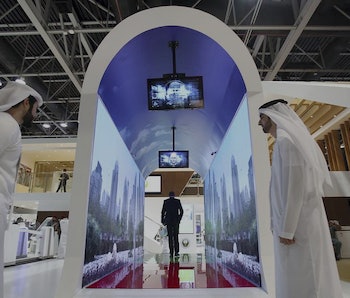 Thanks to new technology that looks like Total Recall, you soon might be able to pass through airport security faster than you can say “get your ass to Mars.”

Aviation officials from the United Arab Emirates announced earlier this week that they’re bringing virtual security tunnels to Dubai airports. Fans of Arnold Schwarzenegger and Paul Verhoeven’s mindbender already have some familiarity with the basic concept of such checkpoint tunnels.

However, the Emirati tunnels rely on artificial intelligence instead of X-rays to check whether a traveler poses a threat. Designed so that it looks like travelers are walking through a virtual aquarium, the tunnel is equipped with face-scanning fish. A.I. is used to speed up the verification process, according to the Emirati news outlet The National.

“The fish is a sort of entertainment and something new for the traveller,” said Major General Obaid Moheir bin Suroor, deputy director general of Dubai’s general directorate of residency and foreigners affairs. “But, at the end of the day, it attracts the vision of the travelers to different corners in the tunnel for the cameras to capture his/her face print.”

Passengers will have to register their faces at an airport kiosk before going through the tunnel, which can also display other scenes or even advertisements. Using biometrics and facial recognition software, the about 80 cameras in the tunnel will read each passenger’s face and match the profile against the identity. If there’s an issue with the scan or the ID, security is alerted and the passenger will be subject to a more extensive check.

The idea for the aquarium walk-through tunnel stemmed from authorities trying to find ways to deal with to growing number of passengers passing through Dubai airports:

Even though airport officials have managed to cut down the time spent at the security clearance desk to five seconds, it is still not fast enough when passenger numbers hit 120 million, said Maj Gen Al Hameeri … He added that security, as much as speeding up procedures and enhancing the travel process for passengers, is a priority.

Officials predict that the UAE’s biggest city will see more than 120 million passengers per year by 2020, according to Dubai Airports’ strategic plan. The new security structure means Dubai — which estimates it had 80 million pass through last year — could easily accommodate the 1.5x increase in people over the next three years without sacrificing customer experience and plane delays.

The first tunnel should be installed at a terminal in Dubai International Airport by the summer of 2018, and rolled out at all Dubai terminal by 2020, The National says.

Dubai airports are often among the first globally to experiment with new advanced technologies, including “smart gates” that allow UAE residents to quick pass through border control and fingerprint readers in the security check process.

More like this
Innovation
8.11.2022 11:00 AM
“Quantum materials” could give the human brain a run for its money, scientists say
By Nathaniel Scharping
Innovation
8.5.2022 11:00 AM
Alexa could diagnose Alzheimer’s and other brain conditions — should it?
By Joanna Thompson
Innovation
8.9.2022 11:00 AM
This self-healing material could fix your dinged-up car in 30 minutes
By Molly Glick
Related Tags
Share: