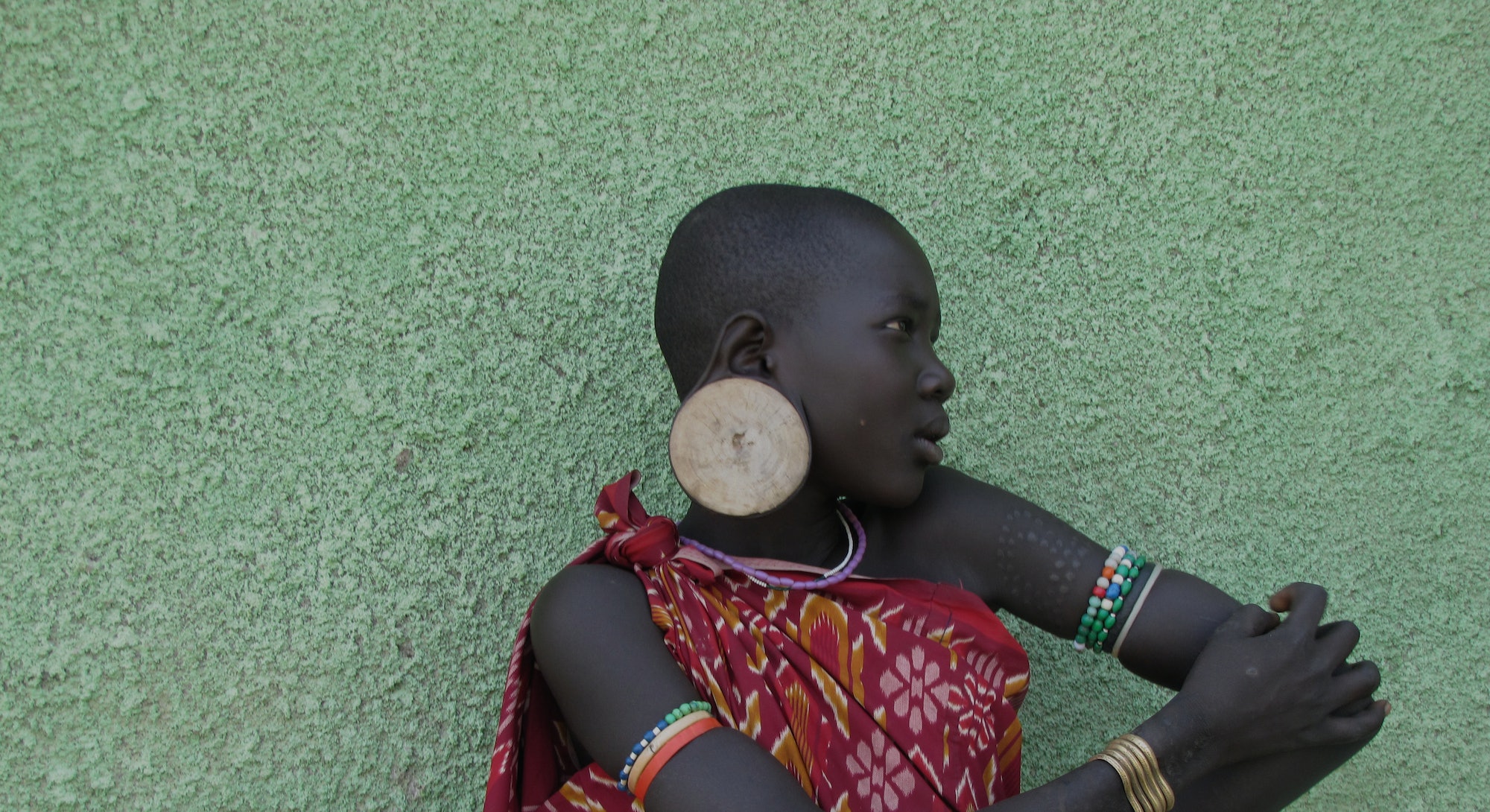 Racism is a grotesque inheritance passed down from light-skinned people living in Europe in the Middle Ages, whose newfound ability to travel long distances led to their first encounters with darker-skinned people. So alarmed by the differences in skin color, they failed to comprehend that the people they encountered were, in fact, human — and treated them as such.

Those long-held racist assumptions based on skin color have been scientifically proven wrong, according to a groundbreaking new study in the journal Science published on Thursday.

With their observations, the team of geneticists led by the University of Pennsylvania’s Sarah Tishkoff, Ph.D., tear down that notion by discrediting the idea that race has any biological roots. (The paper is titled “Loci associated with skin pigmentation identified in African populations.”)

The researchers identified the genes linked to the diversity of human skin color and when and where those genes emerged.

A Hamer individual from Ethiopia who took part in the study. Many alleles associated with light skin originated in Africa, not in Europe.

Tishkoff and her team had been studying genetic diversity among different African populations when they realized the strikingly vast range of skin colors present in African people, from the darker tones that are commonly associated with people in Africa to the very pale skin commonly linked with Europeans.

“In Ethiopia, you’ll find people with very dark skin tones who have this Nilo-Saharan ancestry, who originated in southern Sudan, and then you’ll see people not that far away who have pretty light skin tones,” says Tishkoff. Her team wanted to know what genes were linked to those different skin tones, and whether they were the same genes linked to light or dark skin elsewhere in the world.

And so, they compared the skin tone and the DNA of 1,600 people from ethnically and genetically diverse populations all across Africa to find those genes. To capture skin tone accurately, they used a color meter to measure the light reflectance on each individual’s inner arm, where the sun is least likely to alter the natural skin color. Then, by comparing these observations with their analysis of each person’s genome sequence, they pinpointed four genes whose genetic code showed significant variation between people with different skin colors.

An Amhara individual from Ethiopia who was also part of the study.

The vast diversity of human skin color, they found, is largely due to a few tiny tweaks to the gene sequences in these regions.

Of the four genes they identified, the one most strongly associated with skin tone was SLC24A5, which has been shown to influence light skin tones in European and some southern Asian populations. The others include the MFSD12 gene, which is associated with a skin condition called vitiligo that makes skin lighter in some areas, and OCA2 and HERC2, which are also associated with light skin. These genes, Tishkoff says, aren’t just widespread both inside and outside of Africa but are also very old, suggesting that the idea that some humans have them and others do not is completely bunk.

“These mutations are old. Most of them predate the origin of modern humans. They’ve been variable for tens of thousands, if not hundreds of thousands of years in Africa,” she says. “Everyone had the alleles for light skin.”

Many scientists previously believed that the mutations responsible for light skin arose very recently, but “that’s not entirely the case,” says Tishkoff. She explains that research in the genetics of skin color has been complicated because previous studies had all been conducted on Europeans, and the genes that emerged from those efforts all seemed to have a distinctly European origin. As the new study shows, however, many of the alleles associated with light skin tones, in fact, have an African origin.

A Ju’hoansi individual of the San who was not a part of this study. The San population, which has the oldest genetic lineages in the world, have many alleles associated with light skin.

How those alleles became so common in certain parts of the world and less common in others is the story of early human migration and their interaction with the environment. Modern humans are thought to have emerged in Africa between 200,000 and 300,000 years ago and spread out somewhere between 50,000 and 80,000 years ago, but where they went (and whether they returned to Africa) is up for debate.

There are two leading hypotheses describing how they traveled. The first is that there was single African source population that traveled out of Africa and spread all over the globe. The second, which she says her data is more consistent with, suggests humans first moved toward south Asia and Australo-Melanesia about 80,000 years ago, and then moved again, this time northward, around 60,000 years ago, giving rise to all other populations.

“We don’t know for sure which is correct,” she says.

What we do know is that during these migrations, alleles for certain skin tones were naturally selected for or against depending on the amount of sun in that region. Skin tone is thought to be an adaptation for dealing with varying levels of sunlight; dark skin, which is better able to deal with harmful UV rays, is better suited for people in high-sun environments, while light skin is better suited for creating vitamin D in minimal sunlight.

A Mursi woman of Nilo-Saharan ancestry from Ethiopia, who was not part of the study. Nilo-Saharan pastoralist populations have some of the darkest skin in Africa.

After generations of natural selection, the light skin alleles became uniform among European populations, and dark skin alleles were maintained in sunnier, hotter regions. But in the original modern human source population, everyone had those genes — in fact, we probably inherited them from our hominin ancestors.

“Any population that left [Africa] almost certainly had the light and the dark alleles because they’re so old,” says Tishkoff, who explains that with the genes her team identified, many of the ancestral variants were, in fact, the light-skinned variant. “One of the reasons for thinking that is that our closest ancestors are chimps,” she says.

Dark skin isn’t necessary when you have body hair, she explains, but around the time of Homo habilis, who left the forest and went into the savannah, there would have been natural selection to lose the body hair and increase the number of sweat glands, and if they lost the body hair there would be a selection to have darker pigmented skin because of more skin exposure.

There’s a lot we still don’t know about the biology of skin color, but the more we learn about it, the less important skin color seems to be. If you think of every human’s genome as a novel written in just four nucleotide letters — G, A, T, and C — the genetic differences between people with different skin tones don’t amount to much more than alternate spellings of certain words.

Alessia Ranciaro, a senior research scientist at the University of Pennsylvania, collects a skin reflectance reading from a study participant from a Nilo-Saharan population.

There is no guarantee that Tishkoff’s work will convince people to rethink racist beliefs, but at least it offers us a bit of perspective: Those tiny discrepancies, mere aberrations in the human genome we all share, are at the root of some of the most egregious crimes we commit against each other. Isn’t it time we rethink the poorly informed assumptions that our Middle Age ancestors held?

“If you were to ask someone to tell you what the difference between races is, the number one thing they’re going to say is skin color,” Tishkoff says. “It’s a terrible way to define different populations.”

Despite the wide range of skin pigmentation in humans, little is known about its genetic basis in global populations. Examining ethnically diverse African genomes, we identify variants in or near SLC24A5, MFSD12, DDB1, TMEM138, OCA2 and HERC2 that are significantly associated with skin pigmentation. Genetic evidence indicates that the light pigmentation variant at SLC24A5 was introduced into East Africa by gene flow from non-Africans. At all other loci, variants associated with dark pigmentation in Africans are identical by descent in southern Asian and Australo-Melanesian populations. Functional analyses indicate that MFSD12 encodes a lysosomal protein that affects melanogenesis in zebrafish and mice, and that mutations in melanocyte-specific regulatory regions near DDB1/TMEM138 correlate with expression of UV response genes under selection in Eurasians.