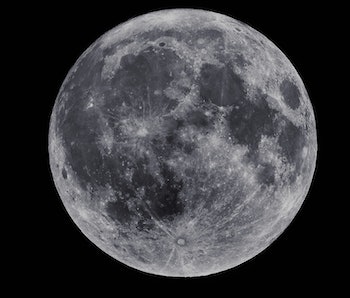 Earth’s clingy best friend, the moon, is an unproblematic fave; a wholesome good in the grease fire of our lives. Now, a new study backed by NASA reveals the moon is so much more than just a good satellite — back a few billion years ago, the moon’s atmosphere was very likely low-key thicc. An astronomer tells Inverse this new insight provides yet another incentive to return to the moon.

The research, published recently in the Earth and Planetary Science Letters, suggests that between 3 and 4 billion years ago, violent volcanic eruptions on the moon released a ton of gas, which in turn, formed an atmosphere. According to the study, the two most intense periods of this activity probably occurred around 3.8 and 3.5 billion years ago. It’s hard to imagine the moon as a chaotic world rather than a chill satellite, but who wasn’t a little angsty back in their teens?

To estimate the dates of these events, Dr. Debra H. Needham, a research scientist at NASA’s Marshall Space Flight Center, and Dr. David A. Kring, Universities Space Research Association (USRA) Senior Staff Scientist, studied samples from volcanic lunar planes collected by astronauts from the Apollo 15 and 17 missions. These extracts were taken from dark, sweeping spots on the moon called maria, which are comprised of basalt — a rock that forms after basaltic lava cools. The duo then used the samples — taken from the moon’s Serenitatis and Imbrium basins — to calculate how much gas the volcanoes that helped form them could have spewed off.

“From a geologic standpoint, this gives us better insight to small body processes internally and exposure to atmospheric chemistry,” astronomer Caitlin Ahrens, who is unaffiliated with this study, tells Inverse. “Having ‘volcanic activity’ on the moon and the before/after effects are still unknown, so knowing this gives us an extra step.”

Nowadays, the moon has an extremely thin atmosphere, so this new information illuminates a world we’ll never get to know.

“The Apollo 17 crew had the LACE instrument (Lunar Atmosphere Composition Experiment) that gave us our current knowledge that the moon does have an ‘atmosphere,’ but it’s so tiny, that it’s practically near vacuum of space conditions,” Ahrens says. “But it does have small percentages of ammonia, methane, and carbon dioxide. This study certainly gives us another reason we should go back to the moon!”

If Elon Musk has his way, we’ll be back to the moon sooner than we think. Hopefully, this time, we can bring cats to the moon base.

If you liked this article, check out this video of what it looks like to land on an alien moon.