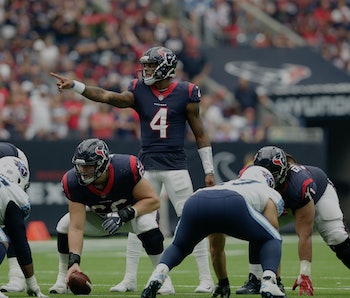 Hands up, who predicted the Kansas City Chiefs would, after just four weeks, be the NFL’s last undefeated team? They look to keep their spotless record intact against a Houston Texans team coming off a monstrous win. A hive mind of NFL fans think the Chiefs have still got this, predicting a win on Sunday.

Buoyed by their opening night win over the New England Patriots, the Chiefs have put together consistent wins over the competition, with Coach Andy Reid getting more than expected out of quarterback Alex Smith and the rest of the offense. Houston, for its part, just beat the Tennessee Titans 57-14. They might bring some offense to the table, too.

You can see the swarm doesn’t make up its mind immediately, but it does ultimately pick the Chiefs with high confidence. The 82 percent brainpower isn’t especially high, but you can see relatively few dissenters are choosing the Texans outright.

Since the line is even, this is essentially just re-picking who will win the game straight up. Odd then that the swarm actually feels considerably more confident here, with 90 percent brainpower behind the high confidence pick.