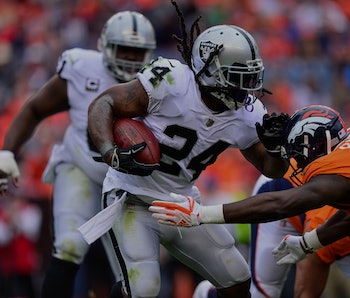 The Baltimore Ravens and Oakland Raiders are both trending downward, as unbeaten starts have given way to two-game losing streaks. Whoever loses Sunday will officially be on the verge of a downward spiral. A hive mind of about 30 NFL fans thinks the Raiders will be the ones to avoid that fate, picking them to win Sunday.

The Ravens have suffered the worse pair of losses, a 26-9 defeat to their division rival Pittsburgh Steelers last week and a 44-7 stomping at the hands of the Jacksonville Jaguars the week before. The Oakland Raiders have lost by smaller margins, but they are also without starting quarterback Derek Carr, with E.J. Manuel set to go in his place as Carr recovers from a back injury.

The swarm likes Oakland here, though only to a point — it’s a low confidence point with 73 percent brainpower behind the choice. A decent chunk of the dissent is in favor of picking the Raiders with high confidence, but it’s fair to say the consensus here is low.

Similarly, the swarm doesn’t feel especially certain of picking the Raiders with a 2.5-point spread — it’s again a low confidence pick with the same 73 percent brainpower.