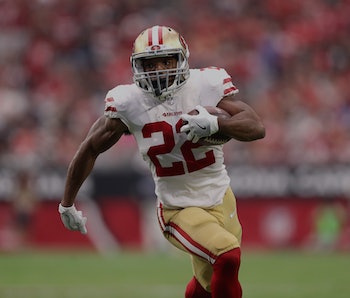 The San Francisco 49ers probably deserve a win right now, with a string of close losses after a season-opening blowout defeat. Can they get it against an Indianapolis Colts team that’s still very much without star quarterback Andrew Luck? Bad news for the 49ers: A hive mind of about 30 NFL fans picks the Indianapolis Colts to win Sunday.

Seriously, look at these losses for the 49ers: 12-9 to the Seattle Seahawks, 41-39 to the Los Angeles Rams, 18-15 to the Arizona Cardinals. That’s three games to division opponents, three losses by a combined eight points. Given the Colts only have a 31-28 victory over the winless Cleveland Browns to their credit, they seem like a team the 49ers ought to be able to beat, especially in Santa Clara.

The hive mind favors the Colts here, though not by a lot, picking them to win with low confidence and 76 percent brainpower.

The addition of a 1.5-point line doesn’t affect things too much, with the Colts again picked to win with low confidence and this time 75 percent collective brainpower. Nobody’s exactly commanding rapturous support in this one.

More like this
Innovation
8.11.2022 11:00 AM
“Quantum materials” could give the human brain a run for its money, scientists say
By Nathaniel Scharping
Innovation
8.5.2022 11:00 AM
Alexa could diagnose Alzheimer’s and other brain conditions — should it?
By Joanna Thompson
Innovation
just now
60 years ago, an iconoclast designer revealed a fix for our biggest tech problem
By Tim Gorichanaz and The Conversation
Related Tags
Share: