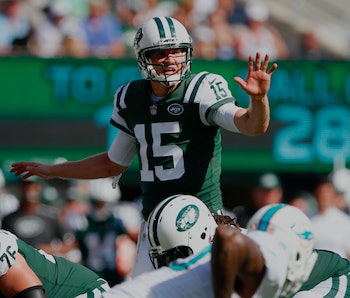 Almost out of nowhere, the Jacksonville Jaguars looked amazing last week, obliterating the previously undefeated Baltimore Ravens 44-7 in London. They have a chance to build on that against the lowly New York Jets, and a hive mind of more than 35 NFL fans like them to do exactly that and win Sunday.

This deep into Jacksonville’s multi-year rebuild, any positive steps are to be celebrated. Being 2-1 with a blowout win against a seemingly solid team like Baltimore is very much that, and a road game against the Jets — who had a solid first win of their own last week against the Miami Dolphins — is about as good a chance as any to prove the Jaguars are ready to keep improving.

Unanimous A.I. has made some scarily accurate predictions in the past using swarm intelligence, as our previous article explains. Most recently, the swarm went a perfect 7-0 in its most recommended picks for last week’s English Premier League slate.

The hive mind is all in on the road team here, picking the Jaguars to win with high confidence. The pick has 85 percent of the swarm’s collective brainpower behind it, which isn’t as high as it could be, but is still a decently good vote of confidence.

The swarm had to think about this one, as you can see it switch directions mid-pick. But the choice was always just between picking Jacksonville to cover with high or low confidence. Ultimately, 79 percent of the swarm is feeling very good that Jacksonville can win on the road by more than three points.

If you liked this article, check out this video of Google DeepMind teaching its A.I. how to dream.

More like this
Innovation
8.11.2022 11:00 AM
“Quantum materials” could give the human brain a run for its money, scientists say
By Nathaniel Scharping
Innovation
8.5.2022 11:00 AM
Alexa could diagnose Alzheimer’s and other brain conditions — should it?
By Joanna Thompson
Innovation
5 minutes ago
60 years ago, an iconoclast designer revealed a fix for our biggest tech problem
By Tim Gorichanaz and The Conversation
Related Tags
Share: