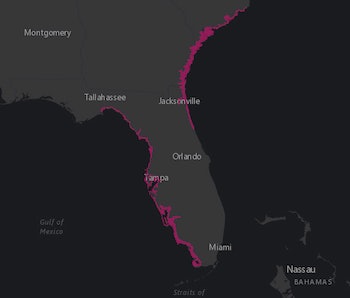 On Tuesday morning, an estimated 25 percent of houses in the Florida Keys had been destroyed and 65 percent had major damange, reported FEMA. “Basically, every house in the Keys was impacted some way,” Brock Long of FEMA told CNN on Tuesday. He said the numbers are early estimates and could change.

Luckily, the predicted storm surge caused by Irma failed to materialize. Per the New York Times: “Because a hurricane’s winds blow counterclockwise, the precise path of the storm matters greatly for determining storm surge. Had Irma lingered far enough off Florida’s Gulf Coast, its eastern wall, where the strongest winds occur, could have shoved six to nine feet of water into parts of Fort Myers and Naples, while swamping Tampa Bay and St. Petersburg as well.”

On Monday, Irma was downgraded from hurricane status to tropical storm, but her wrath is far from over. The National Oceanic and Atmospheric Administration released a warning at 8 a.m. Eastern that areas along Florida’s coast are in danger of “life-threatening inundation” over the next 36 hours.

“This is a life-threatening situation,” NOAA announced on Monday, which called the storm surge the “greatest threat to life and property from a hurricane.” Of the 1,500 people that were killed when Hurricane Katrina ravaged New Orleans in 2005, many of the deaths occurred “directly, or indirectly, as a result of storm surge.” To prevent the same thing from happening to Floridians in Irma’s wake, immediate evacuation is necessary.

How is a Storm Surge Created?

A storm surge isn’t just the result of all the extra water that a hurricane dumps into the ocean. While that certainly accounts for some of the extra volume, it’s largely the strong winds following a hurricane that push all that water inland from the ocean, resulting in dangerously high tides.

It all begins out in the deep ocean, as the hurricane spins furiously around its eye. All that spinning causes the water below to churn, but because the water there is so deep, it doesn’t cause any noticeable disruptions.

But that changes as the eye of the hurricane moves inland, toward shallower water. There, as the water below begins spinning as a result of the winds above, the disruption hits the ocean floor — and the shifting waters have nowhere to go but up and out toward land.

The waters that are likely to hit Florida’s coast Monday were stirred up as Irma approached land on Sunday. As of this morning, a Storm Surge Warning is in effect for Tampa Bay, Cape Sable northward to the Ochlockonee River, and the South Santee River southward to the Flagler/Volusia County line.

The coastal region between the South Santee River ad Fernandina Beach as well as the area between Clearwater Beach and Ochlockonee River are expected to be hit by the largest storm surge, with waters rising to four to six feet above ground.

NOAA is instructing people in these regions to take “all necessary actions to protect life and property from rising water” and warning of “the potential for other dangerous conditions.” In addition to warnings issued to Florida, the National Storm Center has issued a “slight risk” of severe thunderstorms for Georgia and South Carolina coastal areas.