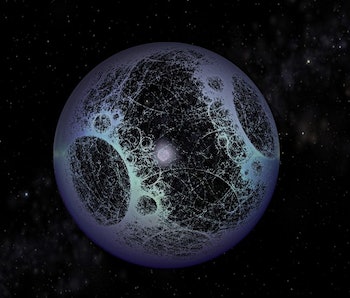 Since October 2015, the astronomy community has obsessed over a peculiar little star 1,280 light-years away from Earth, because of the possibility that some strange lighting effects could be evidence of an intelligent extraterrestrial civilization capable of developing super-advanced infrastructure surrounding the host star of the system. Yes, Aliens.

Except, it turns out, it’s pretty much, definitely, not aliens. A new round of observations made with a pair of space telescopes “eliminates the possibility of an alien megastructure” orbiting KIC 8462852, Huan Meng, an astronomer at the University of Arizona and the lead author of a new study detailing the results, tells Inverse. Meng and his team have submitted their paper to Astrophysical Journal, where it has already gone through peer review and been accepted for publication.

Bummer, right? But some of you are probably a bit confused as to what the hell we’re even discussing here, so before we jump into what the findings are and why our big hope for the existence of aliens just got dashed, here’s a quick recap:

Eight years ago, NASA’s Kepler Space Telescope — the piece of equipment primarily responsible for most of the exoplanet discoveries of the last decade or so — spotted KIC 8462852, sitting between the constellations Lyra and Cygnus. But the data indicated something strange — an aberrant pattern of brightening and dimming from the light emitted from the star.

Normally, the dips of light are an indication that a massive object like a planet (or multiple planets) is orbiting the star. These transits are one of the clearest ways astronomers identify and verify the presence of exponents in other star systems.

But KIC 8462852 was a different story. Like a broken bulb, KIC 8462852, also known as Tabby’s Star or Boyajin’s Star (after its discovery by Louisiana State University astronomer Tabetha Boyajin) or the WTF Star, was flickering at irregular intervals. There wasn’t a straight pattern that indicated there were steady planets orbiting the star. Something else — some inexplicable set of matter — was in the neighborhood.

KIC 8462852, however, is a mature star. It’s lived long enough that one would expect the usual suspects of random dust and debris characterizing new star systems to have settled down into solid spheres of gaseous or rocky planets.

Jason Wright, an astronomer based at Penn State University, pitched a radical hypothesis: The objects causing the unusual dimming observations were alien megastructures transiting in front of the star. Basically, he thought there was a slim chance the dimming was caused by incredibly big, technologically advanced infrastructure parts orbiting the star, specifically put there by an intelligent extraterrestrial species.

Crazy, yes — but what else could explain the staggering 22 percent drop in brightness scientists were seeing? (By comparison, a planet the size of Jupiter, already humungous, would only block about 1 percent of light as it transits a star).

Since then, Boyajin and other astronomers have worked tirelessly to collect more data to test out this theory, as well as other, more plausible causers, like comets or other space junk. Nothing has yielded any definitive support for any one theory, however.

That’s still the case with these latest findings. “What we do not know, is what caused this phenomenon,” says Meng. But they at least they are confident enough to nix the notion that it’s aliens.

In this latest study, Meng and his colleagues (which includes Boyajin) collected observational data from October 2015 to March 2017 of KIC 8462852 using two more NASA space telescopes: Swift, which is able to make X-ray and ultraviolet (UV) light measurements; and Spitzer, which can measure objects in infrared (IR). These observations essentially add two more dimensions to the Kepler data, which is monochromatic.

“We found that from UV, throughout the visible spectrum, to IR, the star is dimming at every wavelength we monitored,” says Meng. That’s good confirmation that the initial Kepler data was accurate.

But more importantly, Meng and his team found that the dimming rates between UV and IR differed significantly. The distinction suggested, “micro-sized dust screens” are the culprit behind the irregular dimming observations. “Only microscopic fine-dust screens are able to scatter the starlight” in the way characterized by measurements, says Meng.

The researchers strongly suspect that a microscopic dust ring originating from circumstellar material found in the system is causing the dimming and brightening exhibited by KIC 8462852. “It cannot be anything from the interstellar medium,” says Meng — meaning the object(s) at the focus of this investigation is definitely within the planetary system of Tabby’s star.

Meng emphasizes, as scientists must, “this is not a firm conclusion that this must be a dust ring around the star. It is [however] consistent with that hypothesis.”

What the researchers can be sure of, however, is that there is no alien megastructure hanging around KIC 8462852. “It’s got to be a microscopic body,” says Meng. “Unless it’s an alien microstructure, this is not an alien civilization.”

The team expects their study see it published soon, and Meng says NASA itself — with the data coming from its array of space telescopes — is preparing their own announcement of the findings within the coming weeks.

“This is of great interest to the astronomy community,” Meng says, in what is perhaps a bit of an understatement. KIC 8462852 has been an object of intense discussion over the last couple of years. While a bit more work is needed before scientists can confirm what’s going on in that particular star system, it’s finally safe to say it ain’t aliens.

But we still want to believe!

More like this
Science
8.5.2022 12:15 PM
10 years ago, the Curiosity rover arrived on Mars — and revolutionized the hunt for alien life
By Allie Hutchison
Science
8.14.2022 7:00 PM
Do aliens exist? Jupiter’s moon Europa could hold the answer
By LAURENCE TOGNETTI and Universe Today
Science
8.13.2022 10:00 AM
How the Webb Telescope could unveil the newborn universe
By CAROLYN COLLINS PETERSEN and Universe Today
Related Tags
Share: