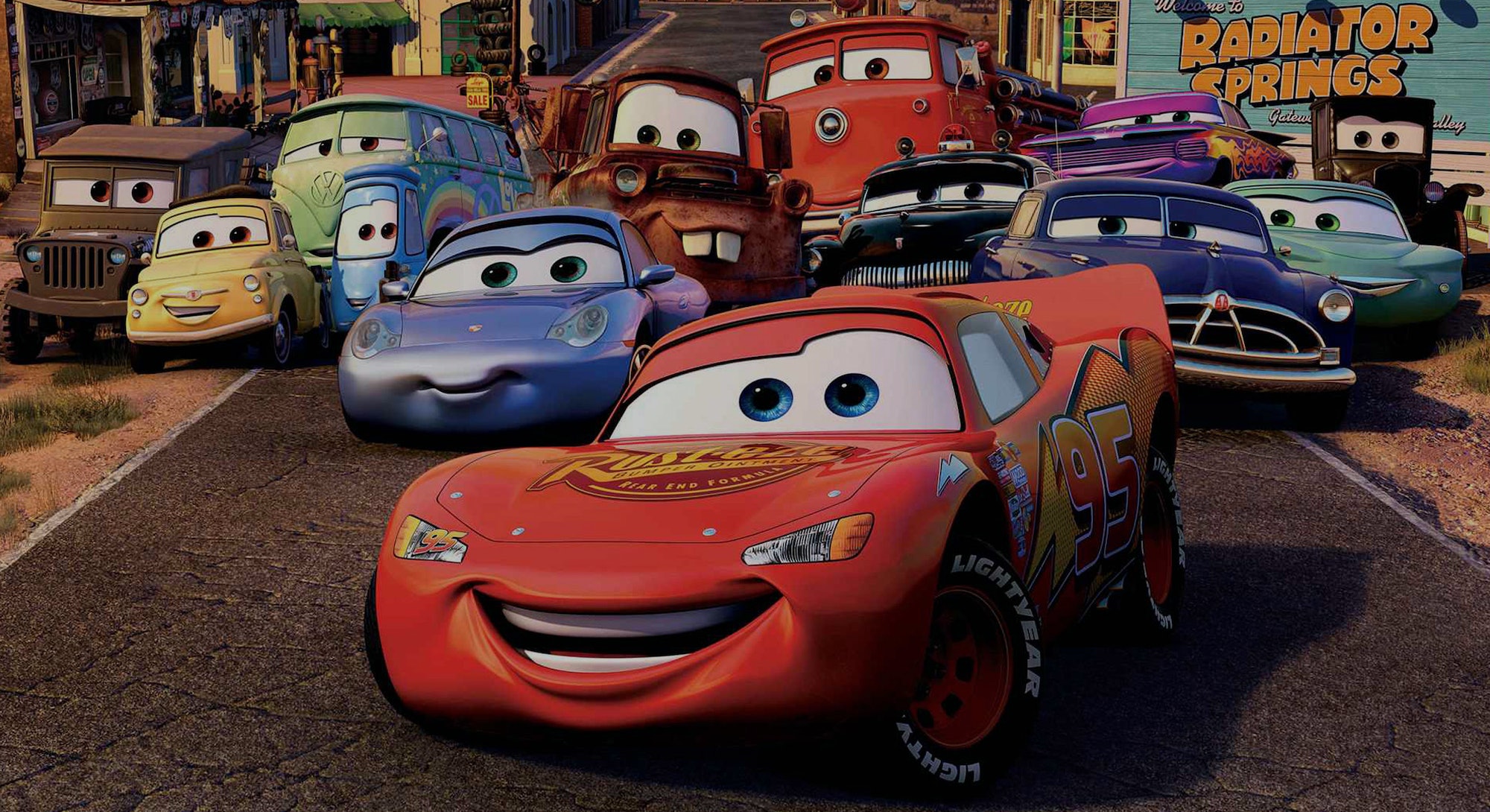 Disney-Pixar introduced the world to Lightning McQueen, a fast-talking, cherry red anthropomorphic race car voiced by Owen Wilson, 11 years ago. And after two sequels and a spin-offs series of films, the Cars franchise has amassed over $1.5 billion at the worldwide box office and, perhaps to the surprise of some, a dedicated adult fan base.

“I’ve loved the series since I saw the first movie in 2006,” Tumblr user the-kings-tail-fin told Inverse via Tumblr messenger, “I was just too scared to admit it to anyone until now; I’ve technically only had an online presence in the fandom since Cars 3 came out.”

If you spend enough time in the fandom-run depths of the information superhighway that is the internet, you begin to understand that there are fans for just about everything. When you know that sinks have a fandom, very little surprises you. That’s why when, just before Cars 3 premiered, someone told me he didn’t believe people would ever cosplay (costume play) Cars, I geared myself up to prove him wrong.

After all, the characters in Cars are, well, cars. They’re anthropomorphic vehicles, ranging from race cars to semi-trucks to emergency vehicles, with eyes for windshields and garages for beds. It’s certainly the biggest of the Disney-Pixar franchises, with its Planes spin-off kicking it over the edge into “cinematic universe” territory. Some might argue — myself included — that Cars is the most child-oriented of all Disney-Pixar’s films and franchises, which includes favorites such as Toy Story, Up, The Incredibles, and Wall-E. While those films are regarded as classics, Cars is widely thought of as an excuse to sell children literally billions of dollars worth of toys.

But, just because something is originally meant for kids doesn’t mean plenty of adults and teenagers won’t also relate to the characters and the bumps along the road they encounter. If anything, the simplicities of good, evil, and happy endings always winning out might be preferable to anything darker.

With this in mind, I steered into the perpetual rush hour pile-up that is Tumblr and found myself navigating not only the blogs of hardcore Cars fans, but also scrolling through their original art, fanfiction, and, yes, some incredibly inventive cosplay.

Most Cars cosplayers tend to use a style of cosplay called “gijinka,” meaning humanization of an animal or otherwise inanimate object, to simplify the costume-making process. Wheels and windows are optional; what matters is that you get the personality and general vibe of the character down.

One cosplayer who goes by the name Pumkin told Inverse that they weren’t interested in an animated movie about talking cars at first. “But [I] was very surprised after watching it how well-written all the different characters are and how the story developed a deeper meaning than I would have expected in a children’s movie,” Pumkin said over email. “I immediately fell in love with it.”

Pumkin, who lives in North Rhine-Westfalia, Germany, is 34 and first saw Cars about 4 years ago. And, when they saw their friend cosplaying Lightning McQueen, they decided to join in on the fun. Pumkin chose to cosplay Not Chuck, Lightning McQueen’s temporary racing crew chief and, admittedly, an incredibly minor character in the series, by making a gijinka (or “carjinka”) costume and joining in on a photoshoot with their friend.

But heroes aren’t the only characters worthy of cosplay. Not everyone can be on Lightning McQueen’s team.

Jessica Tyrer, a 20-year-old from Jimboomba, Queensland, Australia, has cosplayed Chick Hicks, a green race car with a grill that looks like a bristly mustache. [Voiced by Michael Keaton, Chick Hicks is the main antagonist in the first Cars film but by the time Cars 3 rolls around he’s become a sports commentator.

“I really liked cosplaying Chick because I got to have a beard,” Jessica told Inverse via Facebook messenger. “I first watched Cars 11 years ago in the theaters, then almost everyday as a kid since it was my sister and my’s favorite movie.”

Jessica and her sister, Tori, have also cosplayed characters from the Cars spin-off series, Planes, and Jessica hopes to, one day, cosplay Cars fan-favorite Mater, originally voiced by Larry the Cable Guy.

“I love the reaction people have when they see your final cosplay,” Jessica says. “It makes all the hard work worth it.”

Lauryn, a 16-year-old fan from Illinois, runs a Cars blog on Tumblr and writes fanfiction about her favorite characters, taking requests and prompts from fellow fans. She says it’s a peaceful fandom — a relatively uncommon phenomena on Tumblr — but that she didn’t really get into the fandom until after seeing Cars 3 in theaters.

“I remember seeing Cars when I was only a little girl and, gosh, I was so intrigued by the movie,” Lauryn told Inverse via Tumblr messenger. “Girls my age would play with dolls, but I would play with Lightning and Sally,” the main duo and romantic interests of the first film. “Sadly. I started finding different things that I liked and forgot about them for a few years. Then, I saw the Cars 3 preview in theaters last year and I got so excited. I fell in love with them all over again. I’ve recently been going through a loss so this was my first passion I’ve had in months. I downloaded Tumblr and made my own account! Before I knew it, I started posting art and made friends with some amazing people in the fandom.”

Tumblr user the-kings-tail-fin agrees with Lauryn about the fandom’s sense of community, but says a lot of fans are worried about showing their fondness for Cars publicly. “I often offer [other fans] writing advice and help them overcome their fear of expressing their love for Cars online,” she says. “There’s a lot of self-conscious people here, scared of what people will say if they admit they like Cars. There’s a lot of hate for this fandom, which is sad because it’s full of the nicest people I have ever met. We all stand up for each other and help each other out.”

That community isn’t the only thing the-kings-tail-fin is in the fandom for, though. She got into Cars mostly because she’s a car enthusiast.

“There’s a lot of things in these movies that reference historical events in automotive culture (NASCAR, etc) that most people never notice or don’t care about it,” she says. “There’s a lot of humanization both in art and in fics because, honestly, a lot of the Cars fandom doesn’t know much about vehicles. I feel like an exception there. I tend to write fic about canon car characters, but that’s just because I’m better at describing them like that.”

Luckily for the Cars fandom, Disney-Pixar doesn’t seem to be stopping its assembly line any time soon. Cars 3 just premiered this year and an as-yet-untitled film, the third in the Planes series, is expected to premiere some time in 2019; supposedly, it’s about space.

The fandom is already revving its engines in anticipation for more characters and worlds to explore in the Cars universe. And they’re more than happy to share in the love; just don’t be rude about it.

“We just want to be respected and left alone,” the-kings-tail-fin says. “We have a right to like what we do as much as anyone else. There’s so much more to these movies than just talking cars. If people could see past that, I think they’d appreciate them a bit more.”

Unlike more widely acknowledged groups such as the long-suffering Star Wars fandom and Tumblr-dominating groups such as Supernatural and Harry Potter fans, the Cars fandom isn’t exactly mainstream. It probably won’t ever be at the forefront of the cultural zeitgeist, no matter how many more films Disney-Pixar rolls out. And that’s kind of how fans want it to stay. With popularity on Tumblr comes inescapable controversy, something Cars’s adult fans would probably rather leave on the track.

Besides, if Cars teaches us anything, it’s that friends should always come before fame.