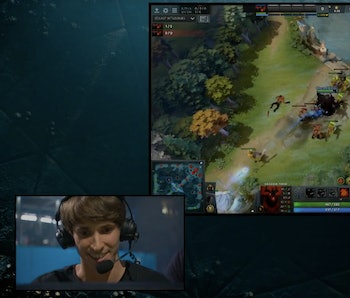 On Friday night, Elon Musk’s OpenAI team took on one of the greatest athletes in the world — in eSports, that is.

The OpenAI-programmed bot took on Dendi, a Ukrainian Dota 2 player who’s widely regarded as one of the best in the world, on the main stage at The International, the competitive video game’s biggest annual competition — and absolutely crushed him.

On Twitter, Musk was quick to cry victory over the best in the world. But there’s some subtlety to what the bot is doing that means it’s not exactly going to replace human players on Team Liquid.

“OpenAI first ever to defeat world’s best players in competitive eSports. Vastly more complex than traditional board games like chess & Go,” Musk tweeted on Friday, referring to Google DeepMind’s AlphaGo defeat of the world’s best players in the ancient, incredibly complex board game. The bot is absolutely remarkable — it displayed a level of dominance over a pro player that I personally have never seen in over a decade of playing and watching Dota and Dota 2. But it’s important to note that the bot was playing Dendi in a one versus one match, a heavily stripped down version of the full, team-based game where many, many of the variables in play are removed.

Dota is a five versus five multiplayer online battle arena game, or MOBA. Each round, the teams choose from a list of roughly 100 characters, called heroes, who each have different strengths, weaknesses and special abilities, with one player controlling one hero each. They then battle over territory on a set map, killing smaller, computer-controlled units to increase their power and attempting to kill one another to give their team an advantage (think of a kill, which knocks a player’s hero out of the game for a set amount of time, like a power play in hockey). The characters have different roles, like offense, defense, and support, but the deep complexity and number of variables mean human players are often able to play a single hero in dozens of different styles, strategies, and roles.

In the 1v1 format, however, both players are assigned the same hero, Shadow Fiend, a popular offensive hero favored by many of the world’s best central-role (known as mid lane) players. The parameters for victory are simple — the first player to get two kills or destroy a tower (a key building) wins. Shadow Fiend isn’t one of the heroes Dendi is notorious for playing, but he’s still a top-tier player with the character regardless. Earlier in the week, OpenAI reported that their bot beat both Sumail, the current 1v1 champion, and Arteezy, another of the world’s best mid lane players.

In this style of play, OpenAI’s bot is completely dominant. Early into the first game, the event’s host asked Dendi: “Does it feel like a player, like a person?” “Uhhhh… nope,” Dendi answered, distracted by yet another perfectly-timed attack. “This guy is really scary,” Dendi kept saying, and at one point yelped “Please stop bullying me!” when the bot rushed at him aggressively. Dendi lost the first game two kills to one (he managed to kill the bot at the same time as it killed him the second time, securing the win). The second match, the bot thrashed him so relentlessly in the opening minutes that he resigned.

Dota 2 has had computer-controlled algorithms that can play against human players for years, but their programming is relatively rudimentary. At a certain level, most pros are good enough to find strategies and weaknesses in the bot’s play style that they can exploit and beat the bots easily. OpenAI’s bot, however, b no weaknesses in the few minutes the world watched it play at TI7.

The OpenAI bot appears to run off a modified version of a genetic machine learning algorithm, meaning it evolves and learns as it plays and discards inferior versions of its code (the company wasn’t specific with its language, but a programmer friend of mine who also plays Dota said it sounded like a genetic algorithm). The bot learned to play the game only by playing against itself. Greg Brockman, leader of the OpenAI Dota 2 team, said that in the early stages, the dueling Shadow Fiends just ran aimlessly around the map until they died. But slowly, they learned strategies that would get them closer to their programmed winning parameters, and after a few weeks and thousands and thousands of games, they became strong enough to defeat the pros. “This bot can learn from scratch in about two weeks of real time,” Brockman said.

The catch, of course, is that 1v1 Dota is not Dota. It’s more of a sideshow, like a homerun derby in baseball. You can build a pitching machine that throws perfect fastballs all day long, and probably a batting machine that hits them out of the park, but building a team of robotic baseball players is a completely different story. Dota’s complexity lies both in its programming, but also in the extremely high level of coordination, communication, and strategy required to play it at the highest level. In the full 5v5 game, there are thousands more variables than in the stripped-down version — so Musk’s quick cry of victory is obfuscating the actual achievement a bit. Still, OpenAI’s not stopping there. The company says its “next step is to create a team of Dota 2 bots which can compete and collaborate with the top human teams” — meaning that if it applies the same impressive technology, next year’s TI8 might have a full team of robotic challengers. “Just wait for next year’s International,” Brockman said.

The implications, of course, are that a bot that can master complex video games can have other uses too.

“What we’ve built here is a general learning system which is still limited in a number of ways, but it’s still capable enough to beat the best human pros at Dota,” Brockman said. “This is a step toward building more general systems that can learn really complicated messy and important real world tasks, like being a surgeon. the goal of OpenAI the company that we work at, is to insure that these really powerful systems are good and beneficial for all of us.”

This, again, is all part of Musk’s plan. His thinking is that eventually, AI will be smarter than human beings, and that the creation of them must be done in a safe, regulated format. “Nobody likes being regulated, but everything (cars, planes, food, drugs, etc) that’s a danger to the public is regulated. AI should be too,” Musk tweeted Friday night. Right now, AI may not be a global menace to society — but it’s certainly terrifying in a Dota 2 match.