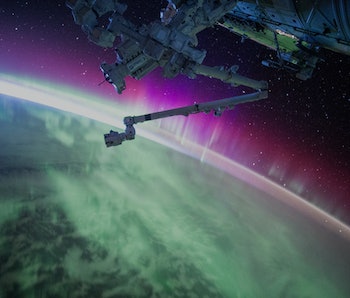 A group of Chinese scientists recently demonstrated the next step in a groundbreaking communications technology that could create a super-fast, nearly unhackable network across the world.

On Thursday, the researchers announced in Nature they had managed to send a “quantum key” from a satellite orbiting the earth to ground stations in Xinglong and Nanshan, China. Quantum keys are incredibly complicated cryptographic keys that can encode information in a nearly-unhackable format, but they rely on a still-revolutionary process of quantum entanglement to work.

The 300-kilobit secure key can be sent in a 10-minute window as the Chinese satellite passes over ground stations in the country. The satellite has orbited at around 310 miles above the earth for the past year, conducting various quantum experiments.

“Satellite-based quantum key distribution can be linked to metropolitan quantum networks where fibers are sufficient and convenient to connect numerous users within a city over 100 kilometers,” Pan said. “We can thus envision a space-ground integrated quantum network, enabling quantum cryptography- most likely the first commercial application of quantum information- useful at a global scale.”

The researchers report that ground-based systems often lose photons — the subatomic particles integral to quantum processes — during transmission, but sending the signals through the earth’s atmosphere provides a format that’s “20 orders of magnitude” more efficient, according to Xin Hua Net.

Quantum communication, and quantum encryption, could be essential to the future of secure communication. While quantum computing is still in its infancy, researchers think its development could create machines that render the traditional method of storing and encrypting data — the binary computing language of 0s and 1s — useless. In simpler terms, quantum computers will be so much more powerful than traditional computers, that they’ll be able to crack any non-quantum code in a fraction of the time, making quantum encryption necessary.

When a signal is secured under quantum communication, any attempt to intercept or monitor the communication will produce a detectable anomaly — like a distortion in the particles enabling the system. If it reaches a certain threshold, the system can secure itself with a quantum key, or abort the communication.

Prior to the satellite transmission, quantum communication had been limited to inefficient ground transmissions using fiber optic cables, which limited transmissions to a few hundred files before photon loss caused them to be too distorted.

“If we transmit the quantum key through a 1,200-km fiber, even with a perfect single-photon source and ideal single-photon detectors, we would obtain only a 1-bit sifted key over six million years,” Pan said.

Though the technology is still in its infancy, experts say it’s a huge step toward the future of communication.

“I mean you could say that the sky’s the limit for quantum technologies, but that is a little bit conservative actually. They’ve gone beyond the sky with these latest experiments,” Karl Ziemelis, the chief physical sciences editor at Nature, told Xin Hua. “And it’s a testament to China’s investments and significant efforts in the physical sciences that this group has been able to push research in practical quantum communication technologies to such an astronomical height.”

More like this
Innovation
8.11.2022 11:00 AM
“Quantum materials” could give the human brain a run for its money, scientists say
By Nathaniel Scharping
Innovation
17 hours ago
This high-tech camera may help protect our identities — here's how it works
By Molly Glick
Innovation
8.15.2022 2:00 PM
Tesla software updates reveal a potential roadblock to electric vehicles’ expansion
By Vivek Astvansh and The Conversation
Related Tags
Share: