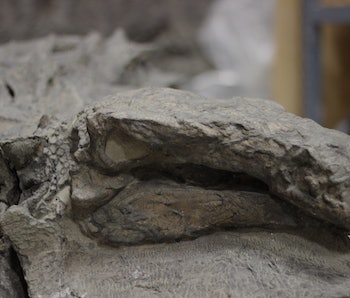 Six years ago,, a heavy machine operator in Canada’s oilsands struck his bucket on something very large and very hard. It turned out to be a one-and-a billion discovery — an armored dinosaur almost perfectly preserved in the three dimensions, the best the world has ever seen.

This 18-foot-long, 1.3-ton beast has finally earned its name: Borealopelta markmitchelli, the first of its genus and species, described for the first time Thursday in Current Biology. “Borealopelta” comes from the Latin and Greek and Greek and Greek for “””Northern shield,””” a reference to its home range and fierce armor. “Markmitchelli” is for Mark Mitchell, the man who spent more than 7,000 hours artfully chipping away the concrete tomb that held this spectacular beast.

Mitchell has been a professional fossil preparator at the Royal Tyrrell Museum in Drumheller, Alberta, for more than two decades. He is part craftsman, part puzzlemaster. It’s his job to take raw fossils, typically embedded in surrounding rock, and reveal what’s inside while giving it enough structural integrity for research and display. It’s not easy work, and this armored dinosaur was particularly demanding.

“This is one of the most challenging specimens I’ve worked on, because of the contrast between the hardness of the rock, and the softness of the fossilized bone,” he tells Inverse. “The bone itself is very chalky. It’s almost like drywall plaster — you can almost scratch it with your fingernail in places.”

Borealopelta markmitchelli is a nodosaur, a type of dinosaur known for its spiky shoulder armor that belongs to the ankylosaur group. Ankylosaurs are among Mitchell’s favorite dinosaurs, he says, so it was particularly rewarding to be the one to reveal the best one ever found. “I’ve always loved dinosaurs and prehistoric animals,” he says. “I love seeing the fossils come out of the [rock] matrix, knowing that I’m the first one ever to see this.”

Mitchell’s task was to remove all of the hard rock around the animal, stopping exactly where the fossilized animal begins. He not only had to look out for the tan-colored, chalky bones, but scaly skin material, which looks like a very thin layer of blackish mineral. In some places, these are easily confused with organic sediments in the surrounding rock. “Some places it’s really obvious and others it was very hard to tell,” he says.

The animal lived about 110 million years ago. It likely died in a flood and was swept out to sea. It eventually sank to the bottom on its back, stirring enough sediment from the seafloor to immediately cover itself. Then a bit of chemical magic happened. The decomposing flesh caused the water around it to become more alkaline, which spurred a chemical reaction in the sediment, which bonded itself into a very hard concrete. This structure was strong enough to resist enormous pressures from above over millions of years of sediment accumulation, allowing the animal to be preserved in three dimensions, exactly as it looked in life.

He used pneumatic power tools — chisels attached to pressurized air hoses. The early work uses heavier, coarser tools, but by the end he’s using something the size of a pen with a microscopic vibrating tip, which delicately removes just the spots Mitchell touches with it, without disturbing the fossil underneath.

In all, the process took more than five years of dedicated work. The finished Borealopelta markmitchelli is currently on public display at the Royal Tyrrell Museum. The paper published this week describing the fossil is just the first in what is sure to be a long legacy of research into who this animal was and how it lived. That study was led by Caleb Brown and Donald Henderson, both vertebrate paleontologists with the museum, and they honor Mitchell’s skilled and patient effort in their chosen name for this new species.

More like this
Science
20 hours ago
Bats growl like death metal singers and scientists finally know why
By Elana Spivack
Science
November 29, 2022
Octopus intelligence may come from a molecule also found in human brains
By Robin Bea
Science
November 27, 2022
Can I feed my pet only dry food? Why the answer is different for cats and dogs
By Tara Yarlagadda
Related Tags
Share: