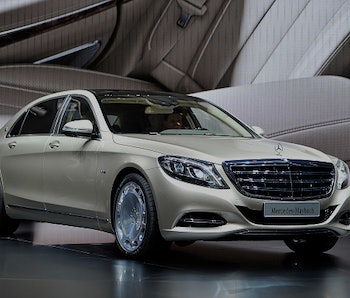 Americans, it seems, love the idea of having the car of the future. They would just prefer for now that it doesn’t drive itself.

Volvo, Mercedes, Audi, BMW, and others are expanding their array of autopilot-esque features: cameras, alarms to warn drivers of potential crashes, counteractive steering if a driver veers out of a lane. Automakers are gradually being introduced into new models or offered as upgrades to older models. The transition into the future of driverless cars will be gradual, as drivers, not technology, pumps the brakes.

Companies are finding that drivers aren't terribly keen on the sense of being driven around … but they aren't adverse to more elaborate tech in their vehicles. An AutoTrader.com survey found that while American drivers don’t want to give up control altogether, they favor the add-ons that anticipate driverless cars, uh, down the road. Drivers want freedom, romance, and control; they also want to be on the edge of the future.

Automakers, then, are aiming to make that tech feel interactive and human. The Washington Post cites the self-driving mode of the new Mercedes F 015 concept car, which allows drivers the WTF option to push a button to suggest the car go faster or slower — which the car can accept or deny. Other car computers will also casually explain what they’re doing, mentioning upcoming crosswalks or other obstacles on the road to placate nervous drivers.

Eventually, automakers hope these features will act as stepping-stones for consumers to steadily accept the appeal in letting the car take the wheel. Until then, designers will find ways to placate drivers who want to maintain at least the veneer of having control.

More like this
Innovation
8.9.2022 11:00 AM
This self-healing material could fix your dinged-up car in 30 minutes
By Molly Glick
Science
8.5.2022 1:00 PM
The most miraculous sci-fi movie on Netflix reveals a scientific debate over aging
By Tara Yarlagadda
Innovation
12 hours ago
“Quantum materials” could give the human brain a run for its money, scientists say
By Nathaniel Scharping
Related Tags
Share: