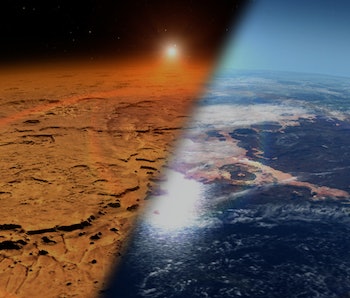 Mars is a bone-dry desert today, but its early history was defined by vast bodies of water and rivers 1,000 feet deep. NASA scientists can’t explain how all that water could have survived for millions of years on the Martian surface without a warm climate.

The planet is 50 million miles farther from the sun than Earth is, so it gets far less warmth from our star. The average temperature on Mars today is a chilly minus 80 degrees, far too cold for water. The situation should have been even worse in the past, as the current scientific consensus is the sun was much fainter and thus cooler billions of years ago. In the early days of the solar system, scientists estimate that the sun was between 25 and 30 percent less luminous than it is now, which should have made wet conditions on Mars nearly impossible.

But NASA’s robots have found plenty of evidence for Mars’ water-rich past. Ashwin Vasavada, the project scientist for the Mars Science Laboratory at NASA’s Jet Propulsion Laboratory, spoke about Mars’ balmy early history during a presentation at JPL last week.

The planet’s lakes brimmed with water and river channels flooded, even when the sun was weak. “The lakes were there for so long, and were so continuous, that it’s very hard to explain them by the other creative ideas that scientists have had of how you can get the rivers and floods in a permanently cold environment,” said Vasavada.

For instance, scientists long thought the Mars of the Hesperian period, which lasted from 3.7 to three billion years ago, was a desert world, similar to the planet today. But Curiosity found evidence of great floods and deep lakes, dramatically transforming our understanding of the planet’s ancient geology.

“We threw a wrench into our understanding of Mars by showing, in the Hesperian, it remained warm and wet,” said Vasavada.

The Curiosity rover landed in the Gale Crater in 2011, and in September 2012 stumbled upon evidence of an ancient stream that NASA believes once ran “vigorously” with water. The next year, the European Space Agency captured an image of an evaporated 1000-mile river, which at some points may have been as much as four miles wide and 1,000 feet deep.

That same year, Curiosity found a pile of rounded pebbles, whose smooth exteriors were almost certainly formed from years of erosion from Martian rivers.

Perhaps the most convincing evidence of Mars’ warm past is the evidence of its longstanding lakes, whose past is preserved in layered sand deposits 600 feet deep. Curiosity’s travels around the Gale Crater have allowed it to drill into and analyze different layers of stratified rocks, which look almost identical to dried-up lake sediments on Earth.

“These layers were deposited about 3.5 billion years ago, coinciding with a time on Earth when life was beginning to take hold” said Elizabeth Rampe, a NASA exploration mission scientist, in a statement last month. “We think early Mars may have been similar to early Earth, and so these environments might have been habitable.”

There were lakes that were so massive and long-lived that they left behind deposits of sand 30 miles long and hundreds of feet thick. “You have to have a lot of flowing water to deliver that sand and sediment,” said Vasavada.

On Earth, similar processes could take millions or even tens of millions of years. Such warming, then, couldn’t have been fleeting or episodic, Vasavada argues, and nearly impossible “unless you had a humid atmosphere that was stable — like a stable warm early climate of Mars.”

Vasavada cited past explanations for creating warm climes on Mars, but these would have been temporary bouts of warming — nothing that would explain great lakes and deep rivers. Perhaps a meteorite slammed into Mars and created a short-lived, dusty atmosphere, or there was a seasonal melting of ice that trickled out a bit of water.

How this warm climate was sustained, then, remains a mystery. The leading contender is a powerful greenhouse gas effect, possibly from volcanic eruptions. Some of the potential heat-trapping gases include carbon dioxide, methane, and sulfur, but it’s unclear how enough of these gases could be emitted into the atmosphere and for enough time to produce a warming effect for million of years. It’s also been suggested that Mars once had an extremely eccentric orbit, bringing the planet in close proximity to the sun, which would have doused it with solar radiation.

Whatever the means of warming, Vasavada is confident that Mars was once a warm land, drowning in water.